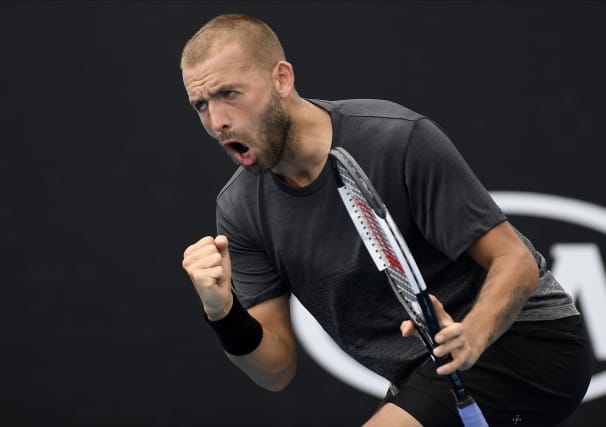 Dan Evans marked his grand slam debut as a seed by coming from two sets to love down to win a match for the first time in his career at the Australian Open.

The British number one defeated American Mackenzie McDonald 3-6 4-6 6-1 6-2 6-3 on a day when the majority of matches on the outdoor courts were cancelled because of heavy rain.

It was a good day for the big names on the covered courts with defending champions Novak Djokovic and Naomi Osaka going through along with Roger Federer, Serena Williams and Ashleigh Barty, while Coco Gauff repeated her Wimbledon victory over Venus Williams.

Kit manufacturers go to great lengths to stand out, and that was certainly the case with Nike and Grigor Dimitrov. The Bulgarian’s tracksuit and shirt combination was the talk of Melbourne Park on Monday.

“I thought it was kind of cool,” he said. “It was cold, raining, I had to go to the other side (of the site). I was like, ‘You know what, it’s fine’. As soon as I walked on the court I realised I had the whole outfit on.

“I love colours, I love experimenting as well. I don’t want to be vanilla.”

Mirza on a mum mission

Sania Mirza is the latest mother on tour. The Indian doubles specialist is playing her first grand slam since the 2017 US Open with one-year-old son Izhaan in tow and is hoping to change attitudes back home.

She said: “I feel, especially in the part of the world that I come from, when women have a kid or kids, it’s treated as kind of an end of their world, it’s all about the children.

“I feel that women are made to feel, if they go out and chase their dreams, they’re probably not the best mothers in the world. I hope that changes.

“I hope that if my victory or even one match can inspire even one woman to follow her dream or heart, I would be really, really privileged.”

Six British players will be in action, weather permitting, on a bumper day of action on Tuesday.

Kyle Edmund resumes 5-2 up on 24th seed Dusan Lajovic in the first set, while Johanna Konta, Heather Watson, Katie Boulter, Harriet Dart and Cameron Norrie will also aim to join Evans in the second round.

Rafael Nadal begins his campaign against Bolivia’s Hugo Dellien, with Maria Sharapova, Simona Halep and Nick Kyrgios other big names on the bill.