What happened on day four of the third Test at Port Elizabeth? 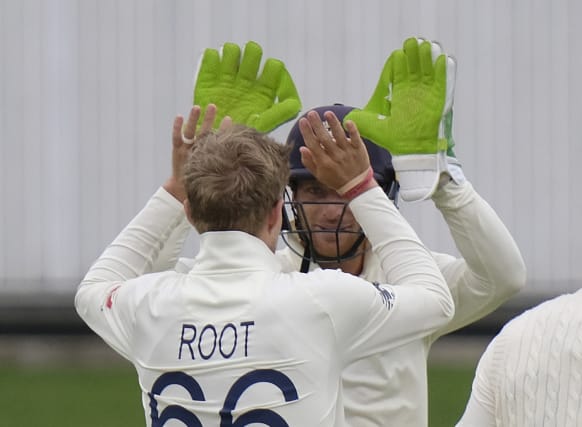 England advanced towards an innings victory in the third Test against South Africa as their pacemen sent stumps flying and Joe Root played an unlikely starring role with the ball.

The tourists began day four in Port Elizabeth with a blitz of four wickets for just one run as they skittled the Proteas for 209, then reduced them to 102 for six after enforcing a rare overseas follow-on.

With a lead of 188 only further rain can realistically prevent England taking a 2-1 series lead to Johannesburg, with a three-hour delay preventing them from wrapping things up well ahead of time.

England made the best of every moment they had either side of that downpour, with seamers Stuart Broad, Sam Curran and Mark Wood all toppling the timbers to hammer home the scoreboard pressure created by their first-innings 499.

Root then took elbowed his way into the tale, banking career-best figures of four for 31 as he turned in a spell worthy of a Test-class off-spinner.

“Yes I am concerned about the weather. I thought Africa was the sunniest place in the world. It turns out it’s like Durham.” (Mark Wood)

After being bowled in the second over of the day and then falling late on to Root, Quinton de Kock became the 68th South African player to be dismissed twice in the same day in Test cricket.

Makhaya Ntini showed his class to journalists (Lynne Cameron/PA)During the lengthy rain break, a group of journalists decided to fill the time by having a quick net practice in the indoor school. With no gloves or pads available it was a gentle affair, although South Africa great – now 42 – was still able to hurry up the amateurs when he joined in to turn his arm over.

Day five of five. For the second game in a row the Test match is heading into its final act, albeit thanks to several interruptions for weather. The case for four-day Tests surely recedes again.