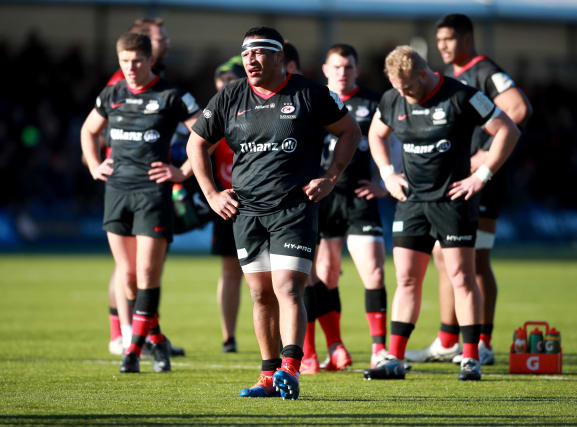 Saracens director of rugby Mark McCall has confirmed the double winners’ squad must be broken up after acknowledging the “end of an era” at Allianz Park.

The crisis-stricken north London club will be relegated from the Gallagher Premiership at the end of the season as punishment for breaching salary cap regulations.

When given the choice of opening up their books for a forensic audit and handing back trophies for the triumphant years of 2018 and 2019 or accepting demotion to the Championship, they opted for the latter.

They had already received a 35-point deduction and £5.36million fine for exceeding the £7million limit for each of the last three seasons, but their rivals’ patience over attempts to reduce their wage bill ran out.

Saracens can at least defend their Champions Cup crown after defeating Racing 92 27-24 to reach the quarter-finals, but stars such as Owen Farrell, Maro Itoje and the Vunipola brothers might not be present beyond May.

“Of course there are going to be changes,” said McCall, who confirmed he would like to remain at the club.

“In many ways this is the end of that era that dates back to the start of 2009. We have got some time to plan for a new era, a new journey, and that is the optimistic way of looking at it.”

While England can pick players competing in the Championship, there is no precedent for it and McCall admits there will be discussions with Eddie Jones over what he wants from his stars.

Saracens supplied six starters for last autumn’s World Cup final defeat by South Africa and would have been widely represented in Warren Gatland’s 2021 Lions squad but for relegation.

England may choose to activate their exceptional circumstances rule to enable them to pick the likes of Farrell and Itoje even if they have agreed contracts to play in France or Japan.

Saracens are seeking urgent talks with Jones and Gatland to shape discussions with their players.

“Every player has got a slightly different situation,” McCall said.

“We’ll also have to talk to Eddie Jones and see what he thinks, in terms of his established players from Saracens and the younger ones. Is he prepared for people to be playing in the Championship?

“Someone like Ben Earl we’d like to keep at the club for the next five years but he’s so close to getting on the England team so we’ve got to see where Eddie’s head is at and where Ben’s head is at.

“There’s a Lions tour at the end of next season so we have to talk to Warren Gatland about what he would like from the Saracens players who are in contention. There’s a bit to be done.

“It’s important that that we make decisions with the players, not for them. Keep the players against their will is never going to work. We need to see how the meetings go next week and see where some players’ thoughts are.

“The players were told on Friday morning that what’s occurred was the probability. They’ve had 48 hours to think about it.

“They need to feel what they feel and it’s possible that how they feel in a few days’ time might be different as well.

“We will meet every player next week as a first off to see how they are feeling. It won’t be straight forward.”

In a statement released on Sunday, Saracens apologised unreservedly for the salary cap scandal, adding “our goal is to rebuild confidence and trust”, while club captain Brad Barritt offers a player’s perspective.

“People have given their lives to this club, the better part of their career. Everyone is hugely disappointed. Everyone is devastated about it,” Barritt said.

“This is something we’ve all grown up loving. In many ways we don’t go into it to make money.”