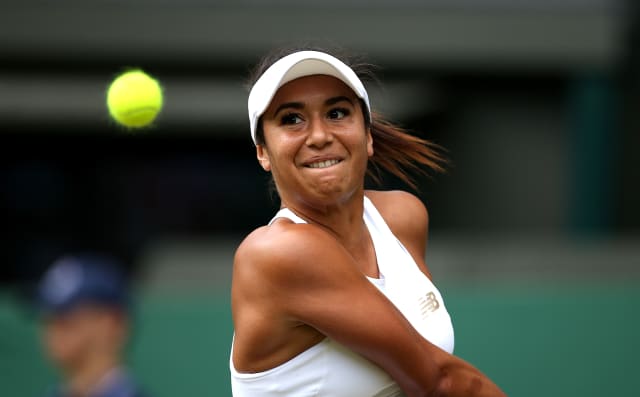 Watson and Duffus, a striker for Yeovil, have been dating since meeting at a restaurant last summer and the relationship appears to have given a boost to both their careers.

Duffus has scored 12 goals in the National League this season and has been linked with a return to the Football League, where he previously played for Oldham and Bury, while Watson has climbed 50 places in the rankings since the end of September.

The 27-year-old said: “Actually since we both met each other we’re both doing a lot, lot better.

“I don’t like to let boys have too much influence over me but he has really been a good influence. He’s so calm, level-headed.

“I think you all know I’m quite emotional. He’s just really, really supportive. He gets up at all hours of the night, he watched all my matches in Hobart. I just need that.”

Watson only arrived in Melbourne, where she will play Kristyna Pliskova in the first round of the Australian Open, on Saturday after reaching the semi-finals of the Hobart International.

Her quarter-final win against 17th-ranked Elise Mertens was her best for two and a half years, and the run saw her ranking shoot up from 101 to 75.

Watson’s demeanour is certainly very different to 12 months ago, when it was clear she was not happy on or off the court, and a first-round defeat by Petra Martic was the second of an eight-match losing streak.

“It is incredible the contrast between how I was last year and how I am this year,” she said.

“Just in life in general, I feel in a very good place, very happy, the support system around me is great and I think that’s really showing with my tennis and my results the last five, six months or so.”

Watson has become a football fan and was at Huish Park on Boxing Day to see Duffus score a hat-trick in a 6-2 victory over Torquay.

The British number two, who was previously in a relationship with fellow tennis player Lloyd Glasspool, admits her preconceptions about footballers initially put her off, saying: “I found out later in the night (he was a footballer) so I was like, ‘for sure, not going to date him’. Not going there.

“At that stage of my life I had no interest in boys. I thought they were the worst. I didn’t want a boyfriend for a long, long time so for me it was just going to be a fun night. Nice meal, meet someone new and then that’s it. He had other plans.”

Watson’s form is a boon for Fed Cup captain Anne Keothavong, who will be without number one Johanna Konta after she decided not to play in the event this year.

Watson is almost certain to be number one for the play-off against Slovakia in Bratislava the weekend after the Australian Open.

She admits missing out in 2019, when Britain came through the regional tournament held in Bath and then defeated Kazakhstan in London for their best win in 26 years, hurt deeply.

“It was such a shame for me because all those years I’ve played Fed Cup and and the one year it’s in England I was sick and then the third player in the team so didn’t get to play,” she said.

“I was really gutted because a home tie was all I wanted for so long and to play in front of the home crowd. But hopefully we will get there again.”

The number two player could well be 23-year-old Harriet Dart, who repeated her achievement of 12 months ago by coming through three rounds of qualifying in Melbourne.

The achievement turned somewhat sour last year when she failed to win a game against Maria Sharapova but the draw has been kinder this time, with Japan’s Misaki Doi her first-round opponent on Tuesday.

Dart said of the Sharapova clash: “I definitely think my emotions got the better of me, playing on a big arena for the first time. I won’t be the last person who loses to a scoreline like that at a grand slam. And I’m sure I wasn’t the first.

“It’s kind of weird coming back here. Then again, I’ve had three matches in ‘qualies’, and I’ve just got to remember that I deserve my place.”