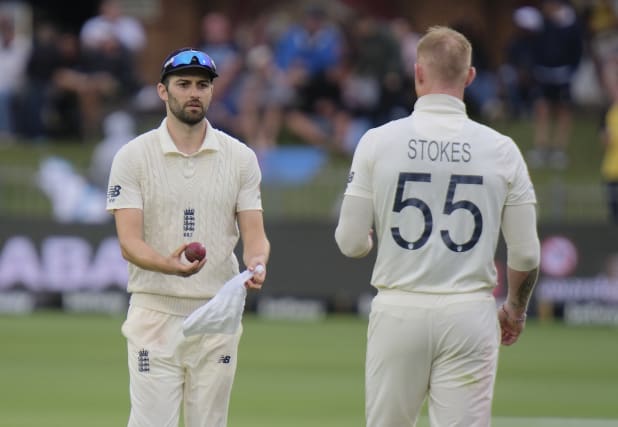 England’s pacemen sent South African stumps flying as they pushed towards an innings victory despite more rain delays on day four of the third Test at Port Elizabeth.

The tourists took four wickets for just one run to skittle the Proteas for 209 before a three-hour break for weather, then left them 44 for three at tea after enforcing the follow-on – still 246 behind.

Where Dom Bess’ off-spin had been key earlier in the match, the quick men took the chance to assert themselves on proceedings in thrilling fashion as Stuart Broad, Sam Curran and Mark Wood all toppled the timbers.

Play resumed at St George’s Park with the hosts on 208 for six – needing 92 to avoid batting again. They never came close to making a fight of it, rolled in just 28 deliveries.

England celebrated wickets in the each of the first three overs as off, middle and leg stump all came out of the ground. Broad began by seaming the fifth ball of the morning past Vernon Philander’s inside edge to send him back for 27 and Curran repeated the trick from the Duck Pond End.

Quinton De Kock, dropped three times by Ben Stokes on his way to 63, had ran out of luck and allowed the left-armer’s full ball right to go right through him.

Keshav Maharaj joined the procession when he aimed a reckless swipe at Broad, dragging on messily, before Kagiso Rabada moved the total along for the first time with a single.

That was as good as it got, with Rabada chipping lazily to Wood at mid-off, Broad having bagged three for nought in 2.4 overs. Root accepted the chance to put the careworn hosts back in again, enforcing the follow-on for just the second time in his captaincy. England had not done so overseas since Wellington in 2013.

Pieter Malan and Dean Elgar rebuffed seven overs before showers forced a long interruption, and when play did resume Wood picked up the baton.

He cleaned up Elgar for 15, going full after a series of bumpers and rocking off stump via a thin outside edge. Zubayr Hamza was next up and he was instantly rattled by Wood’s pace and trajectory.

Riddled with doubt and evasive at the crease he shuffled across as the ball reared towards his hop and feathered through to Jos Buttler. Malan and Faf Du Plessis looked to see things through to tea without further loss and almost made it.

Having rode out an angry spell from Stokes and some variable bounce from Bess it was Root’s part-time spin that did the trick, thudding Malan’s front pad in front after 79 balls and 12 runs.