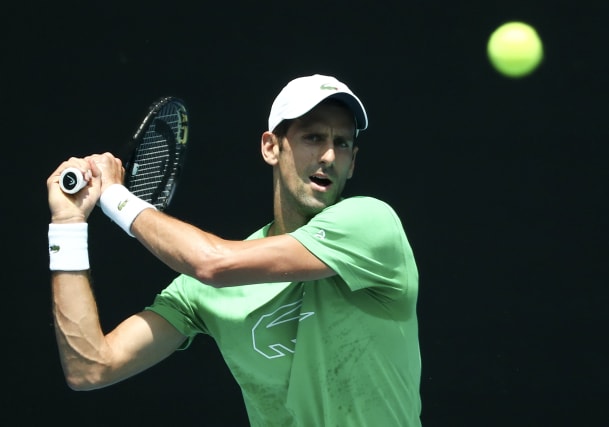 ATP Cup success with Serbia took ‘a lot’ of energy ahead of his bid for an eighth Australian Open title, Novak Djokoic has admitted.

Djokovic thrilled the large ex-pat Serbian community in Sydney by guiding his country to the title at the inaugural event, winning six singles matches and two doubles contests.

Leading players try to avoid over-extending themselves too close to a grand slam, with the ATP Cup already claiming its first victim as Australian number one Alex De Minaur was ruled out of his home grand slam with an abdominal injury.

Djokovic adjusted his preparation for Melbourne, saying: “I did not have such an intensive couple of weeks before the Australian Open for many years.

“It was a lot of physical and emotional energy being spent in the ATP Cup, which of course was perfect for me individually, I won all my matches in singles and doubles. We as a team won the title, which was definitely one of the highlights of my career.

“I keep saying that winning with my friends, with the team, representing my country, winning team competitions, is definitely something that I cherish and that fulfils me truly.

“It was a phenomenal couple of weeks and a great lead-up to the Australian Open. But it did take a lot out of me. I did adjust my training sessions towards that, so I had a little bit more recuperation rather than just stepping on the accelerator a little bit more.”

Djokovic is seeded second behind Rafael Nadal, who he demolished in the final last year, but clearly goes in as the favourite to win yet another title at Melbourne Park.

For the second year in a row, the big three of Nadal, Djokovic and Roger Federer are the top seeds.

It is more than three years since anyone outside that trio has won a slam and, of the current players who have done so during their careers, all are aged 30 or above.

The efforts of the younger generation to change that statistic will once again be a major storyline, with last year’s semi-finalist Stefanos Tsitsipas and US Open runner-up Daniil Medvedev the leading contenders.

“I don’t think they are missing too much. But, at the same time, to win a slam and also to be consistently on the top level for many years, it takes I think a player to gain that mental and emotional maturity and experience to understand his own strengths, to fight his own fears, to really be able to maintain that level for a long time.

“Rafa, Roger, and I, obviously, because of the past 10, 15 years, we know what we need to do mentally also in this particular situation. That gives us probably a little bit of an edge.

“They are definitely hungry. They’re challenging.”