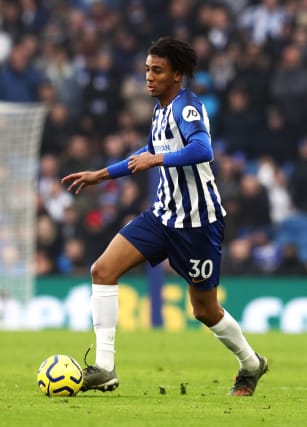 Brighton defender Bernardo believes his side’s performances are not being rewarded with the points they deserve.

Brazilian Bernardo feels the Seagulls’ style of play has improved since the summer appointment of head coach Graham Potter.

However, the south coast club are a point worse off than at this stage last season under former manager Chris Hughton.

“If you look at the way we have been playing it doesn’t translate into the numbers,” Bernardo told Brighton’s website.

“Of course what matters is the goals you score and concede but I still think we are moving in the right way.

“We are confident as a squad. In the second half of last season we had a problem but we know what we did wrong and we’re playing better football this season and we know what we have to do.”

Leandro Trossard fired Brighton ahead against Villa on Saturday but they invited pressure in the second half and were punished by a superb strike from Jack Grealish 15 minutes from time.

Albion’s only win from their last eight top-flight fixtures came at home to second-bottom Bournemouth on December 28.

The Seagulls travel along the south coast for the return meeting on Tuesday evening, bidding to ease their relegation fears and pile more misery on Eddie Howe’s Cherries.

“We are playing teams fighting for the same spots at the moment and I still think we have a great chance to change our situation,” said the 24-year-old.

“Tuesday is a massive game for us. We need to focus on that now but we are confident we can produce an even better performance than we did (on Saturday).”

Dean Smith’s visitors were in danger of slipping to a seventh defeat from nine league games after Trossard beat debutant goalkeeper Pepe Reina in the 38th minute.

Left-back Matt Targett feels Villa, who host fellow strugglers Watford on Tuesday evening, showed their desire to beat the drop during an improved second-half showing at the Amex Stadium.

“We spoke at half-time, you either fold or you pick yourselves up and go out there and prove why you want to stay in the Premier League,” Targett told his club’s website.

“When you come to teams like this who are down there with you, you can’t let them escape from you, you have to keep them in sight. We did that.

“Of course we would have liked three points but we’ll take the draw and go again on Tuesday night at Villa Park.”