Wolves claw their way back to win at Southampton 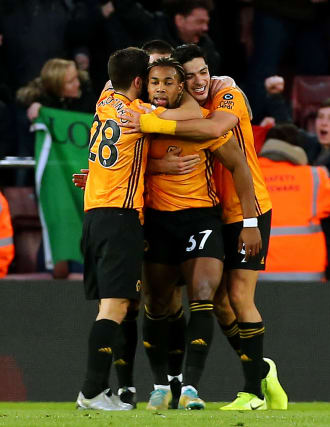 The Mexico striker levelled from the spot with a penalty rightly awarded after a Video Assistant Referee (VAR) check, before blasting home a breathless winner for Nuno Espirito Santo’s visitors.

Jimenez broke a five-game scoring duck to move to 10 league goals, and complete an impressive turnaround win for Wolves, who had trailed 2-0 at the break.

Defender Jan Bednarek’s first goal since April 2018 and forward Shane Long’s first effort in nine months had Southampton dreaming of a sixth win in seven games in all competitions.

While all eyes were on red-hot striker Danny Ings – with 10 goals in the last eleven games – it was Long and Bednarek who pounced instead as Ralph Hasenhuttl’s side took control.

But after the break Wolves shook off their sluggishness and stormed to an impressive victory kick-started by Pedro Neto drilling home from close range.

Jonny was upended in the area by Jack Stephens and Cedric Soares for the penalty that Jimenez dispatched to level the clash. And then the 28-year-old fired home again to seal the win, with Adama Traore again impressing with two assists.

Southampton went into an early lead when Bednarek took advantage of some lax Wolves defending that allowed him to side-foot home.

Wolves found most joy through Neto on the left, and it was his byline cross that most threatened Saints in the opening half-hour.

Alex McCarthy flapped at the centre and somehow managed just enough of a feathered touch to thwart the lurking Raul Jimenez.

The Wolves hitman still managed to adjust his feet quickly enough to flick goalwards, but even then his effort struck McCarthy in the face.

Another inch-perfect Neto cross unhinged the Saints defence again, with Jimenez once more threatening. But this time the 28-year-old prodded wide at full stretch.

Saints quickly doubled the lead.  Stuart Armstrong clawed back possession with a sliding tackle and Cedric whipped in a teasing right-wing cross, with Saints refusing to let Wolves settle on the ball.

Ireland forward Long raced onto the centre and delivered a fine glancing header, sending Saints into a deserved 2-0 lead.

Saints picked up where they left off after the break, but Long was unable to convert a good chance.

And the hosts were soon pegged back when Neto drilled home after flicking the ball onto his chest for control.

A VAR check was required to ensure Neto had not handled the ball, but despite the clumsy set-up the finish was allowed to stand.

Amid a total momentum shift Wolves plundered an equaliser from the spot. Stephens and Cedric conspired to block Jonny off the ball in the box, but referee Darren England initially ruled out a penalty.

As an enthralling game continued to break up, Nathan Redmond fired a dipping 20-yard effort onto the crossbar, before Neto hacked high and wide when through on goal for Wolves.

Just when Saints shifted their approach in search of a winner, Wolves broke at pace, Traore beat the offside trap and conjured a fine cutback – and Jimenez delivered the killer blow.