What happened on day three of the third Test between South Africa and England? 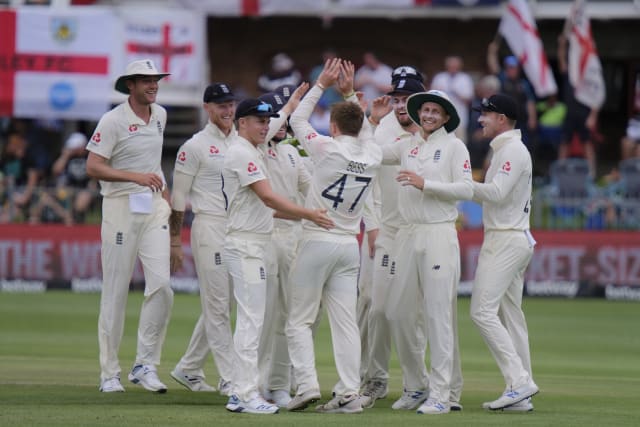 Dom Bess made history with a maiden five-wicket haul in Port Elizabeth before a lengthy rain delay and three dropped catches from Ben Stokes halted England’s victory push in the third Test against South Africa.

Bess, aged 22 and 180 days, became the youngest English spinner to take an overseas five-for during a stirring third morning that seemed to leave the Proteas hanging by a thread, 386 behind on 113 for five.

But showers delayed play for over three hours through the middle of the day and England struck just once more in an extended evening session as South Africa closed on 208 for six, 92 away from avoiding the follow-on.

Bess closed with figures of five for 51, an incredible return for a player who spends much of his county career as understudy to Jack Leach and was a late call-up to the tour as illness cover for his Somerset team-mate.

Stokes was the man to finally see off the stoic nightwatchman Anrich Nortje, who lasted over three hours, but a hat-trick of uncharacteristic spills at slip spared the dangerous Quinton De Kock on 30, 56 and 63.

Anrich Nortje’s nightwatchman’s knock was the longest of his first-class career, coming just two games after his previous best of 89 deliveries in the first Test at Centurion. The longest he has ever batted at domestic level, is a 78-ball stay against Free State in 2016, also at Port Elizabeth.

Curran in a flap

As England scrambled for a breakthrough during the extended evening session, Sam Curran dipped into his box of tricks by flapping his right arm as he approached the crease – a clear attempt to force a lapse from the focused Nortje. He did not bite, instead pulling out at the crease and forcing the bowler to abort.

Left not right for Wood

After spending over three hours of the field, Stuart Broad and Mark Wood decided to limber up for the delayed final session by trying their hand at slow stuff under the watch of spin consultant Jeetan Patel. There were passable, if wayward, impressions of Harbhajan Singh and Anil Kumble but Wood’s attempt was the low point – 10 yards too high, 10 yards too wide and landing in the leg-slip region.

Day four of five: The game is well poised and, given its full complement of six more sessions, would surely wind towards a compelling finish. As it is the weather forecast is poor for the next two days and a draw could well be the likeliest result.