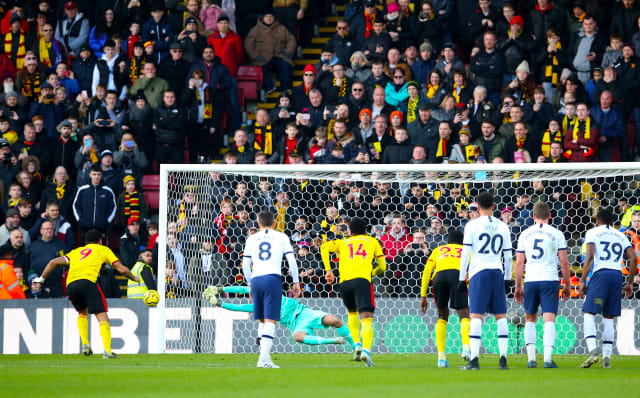 The Hornets skipper saw his second-half spot-kick saved by Paulo Gazzaniga, but it was another point claimed during the current resurgence under Nigel Pearson.

Watford have now taken 14 points from their last six games and are looking upwards in the final third of the campaign.

They came up against a Spurs team stuttering under Jose Mourinho and lacking a goalscoring threat without the injured Harry Kane.

Mourinho’s side have now gone three league games without finding the net and are without a win since Boxing Day, meaning their top-four chances are diminishing with every match.

The Portuguese will surely be knocking on chairman Daniel Levy’s door to demand a new striker before the end of the month as Lucas Moura, Dele Alli and Son Heung-min all missed decent opportunities.

Mourinho opted to start Giovani Lo Celso instead of Christian Eriksen in a deep-lying midfield role and the Argentinian was pulling the strings in a slick opening phase for Spurs.

They controlled the opening 15 minutes but only had non-threatening attempts from distance from Erik Lamela and Japhet Tanganga to show for it.

The game became very scrappy, not helped by a technical failure to Michael Oliver’s battery equipment which may have stopped him checking a potentially dangerous foul by Etienne Capoue on Tanganga, with the Watford man escaping a card completely.

Play was held up for the best part of three and a half minutes, much to the annoyance of the crowd, who sang about their dislike of VAR.

Capoue was perhaps lucky to stay on the pitch shortly after as he cynically took out Lo Celso and was booked.

Spurs finished the first half on top and could have taken the lead in the 38th minute.

Alli drove forward and played in Moura, but the Brazilian’s shot was well saved by an alert Ben Foster, who rushed off his line to get the block in.

After surviving a poor miss by Abdoulaye Doucoure, Spurs had two more big chances to take the lead.

First Alli could not keep a header down from Son’s cross and then the South Korean blazed over when he burst clear down the right.

But they needed a big contribution from goalkeeper Gazzaniga to keep them on level terms in the 70th minute as he pushed out Deeney’s penalty.

Oliver pointed to the spot when Gerard Deulofeu’s shot was blocked by the hand of Jan Vertonghen, but Gazzaniga came to the rescue as he repelled Deeney’s effort with a save to his right.

Both sides pushed for a winner in the final 20 minutes, but it was Spurs who got into the better positions.

However, they wasted them until stoppage time, when they thought they had found a winner.

Serge Aurier’s low cross led to a scramble and Lamela flicked an effort at goal but new signing Ignacio Pussetto made a fine impression as he cleared the ball off the line, with goal-line technology telling referee Oliver that it had not crossed.