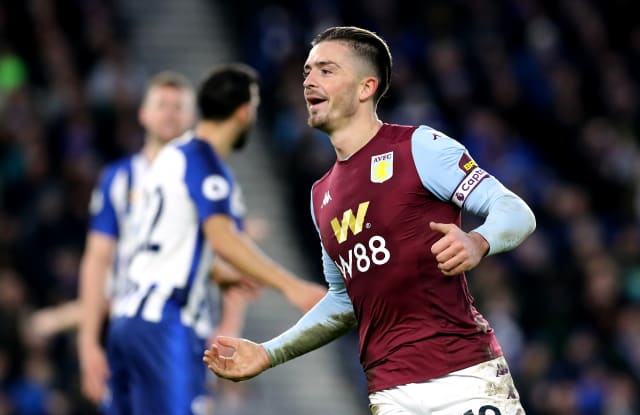 Jack Grealish continued his fine goalscoring form against Brighton to salvage relegation-threatened Aston Villa a point from a 1-1 draw at the Amex Stadium.

Villa captain Grealish scored for the fourth successive meeting with Albion by lashing home 15 minutes from time and earning the visitors a potentially vital point in the battle for survival.

Dean Smith’s 18th-placed visitors remain a single point from safety, while Brighton are just three points better off after failing to hang on to their slender lead.

Tempers boiled over at the final whistle, with an altercation between Neal Maupay and Douglas Luiz leading to the players being separated by team-mates.

The former Liverpool player was making his first Premier League appearance since May 2013 and his first job of note was to pick the ball out of his net seven minutes from the end of a largely forgettable first half.

Belgian Trossard did the damage, firing a low, angled drive across the 37-year-old keeper and into the bottom right corner after being slipped in following a powerful run by Frenchman Maupay.

The clinical finish was Trossard’s third goal of the season and first in 12 outings dating back to early November.

Neither side had managed an attempt on target until that point.

With little sign of an imminent equaliser, Villa boss Smith turned to his bench 23 minutes from time and brought on 18-year-old American Indiana Vassilev for his maiden Premier League appearance.

The away side’s first shot on target was a tame 75th-minute free-kick from substitute Luiz, but they were level moments later.

Unmarked Grealish was given far too much room by Brighton’s backline and he expertly controlled Luiz’s right-wing cross before lashing a soaring left-footed shot past Maty Ryan in front of the delirious travelling fans.

Grealish’s previous strikes against Brighton included a late equaliser at Villa Park which denied Albion the Championship title in 2017.

With the momentum behind them, the visitors had looked more likely to go on and win it but they ended up indebted to their veteran keeper.

Reina, who played only once in Serie A this season, proved he still has the reflexes for top-flight football by tipping away an acrobatic Maupay effort two minutes from time as both sides had to be content with a point.