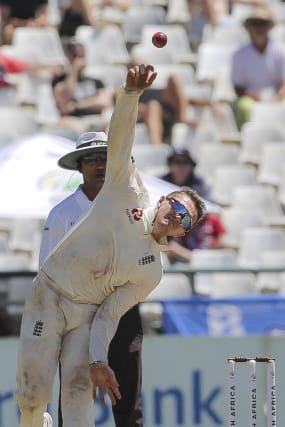 Dom Bess hopes his first five-wicket haul in an England shirt represents “the start of a journey” that has plenty of successful distance left to run.

Bess became the latest member of Joe Root’s fresh-faced side to announce himself on the tour of South Africa, following maiden centuries from Dom Sibley and Ollie Pope with figures of five for 51 on day three of the third Test.

The off-spinner was not included in the original squad, called up as illness cover for his Somerset team-mate Jack Leach and kept on after impressing in training, but became the focal point during a rampant morning for England in Port Elizabeth.

Having already seen off Pieter Malan and Zubayr Hamza on the second evening, he dismissed Dean Elgar, Faf du Plessis and Rassie van der Dussen before lunch as the Proteas lurched to 109 for five.

A rain delay of just over three hours, Anrich Nortje’s defiant nightwatchman’s innings and Ben Stokes’ hat-trick of dropped slip catches off Quinton de Kock combined to ease the pressure as the hosts closed on 208 for six, still 92 short of the follow-on target, but Bess’ achievements were inked in.

Aged 22 and 180 days he became the youngest English spinner to claim an overseas five-for, shaving 74 days off Eric Hollies’ 85-year-old record, and is eager for more.

“I’ll cherish it for a long time because I’ve worked very hard for days like this, but also knowing that hopefully there’s a lot more to come,” he said.

“It’s just the start of a journey. It’s funny how cricket happens, how the ride goes.”

That enigmatic comment was recognition that things have not progressed on a smooth upward curve since he played his first two Tests against Pakistan in 2018.

He has often had to play second tier to Leach at Somerset since then and even spent a spell on loan at Yorkshire last season. Management and coaching staff at both county and international level have handled him carefully, though, and a brief spell away from the game was followed with the golden opportunity to work with Sri Lankan great Rangana Herath at an ECB training camp in Mumbai.

He had just finished that programme, under the guidance of Gloucestershire coach Richard Dawson, when his unexpected England call came.

“I had a little bit of time with Herath and it was a ball to Faf, which worked a little bit, that I’d been working on with him,” he said.

“The journey I’ve come on is to get a lot stronger and mentally to know I want to bowl my best ball as often as possible. That means challenging the batter in the air, off the pitch, through my pace, dropping different angles, using the crease.

“I’ve worked a lot more on getting up and over the ball and in India that was one of the key things I was working on out there.”

Bess cheerfully admitted he had briefly entertained hopes of becoming just the third man in Test history to take all 10 wickets in an innings, but saw his chance to match Jim Laker and Anil Kumble disappear when Stokes took number six.

“I did (consider it) a little bit, but as soon as I did think that I was brought back to reality,” he said.

“Ten is a bit greedy, but there’s obviously four still out there. There was a couple of lads out there who did bet on all 10 when I got five. It was 7/1 I think but unfortunately they’ve lost that bet.”