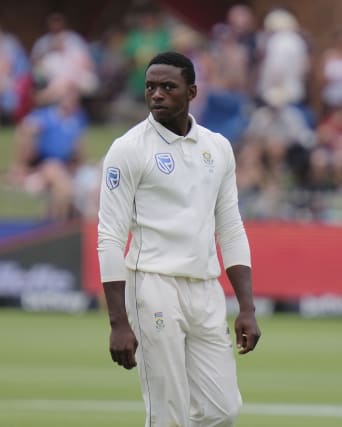 South Africa’s plans for the decisive fourth Test against England are in disarray after paceman Kagiso Rabada was banned following his send-off of Joe Root.

Rabada had just clean bowled the England captain on day one of the third Test in Port Elizabeth when he let his emotions get the better of him, following through just in front of Root as he pumped his fists and roared in celebration.

That drew the attention of Zimbabwean official Andy Pycroft, who charged the 24-year-old with “using language, actions or gestures which disparage or which could provoke an aggressive reaction from a batter”.

Rabada was fined 15 per cent of his match fee but more importantly picked up a demerit point – taking his tally to the threshold of four in a two-year period. The bowler accepted the charge and will now miss out on next week’s clash at the Wanderers in Johannesburg.

Proteas head coach Mark Boucher, who played 147 Tests during his own international career, could not hide his disappointment with the situation and appeared to call into question to the strictness of the International Cricket Council’s disciplinary code.

“I didn’t think there was anything wrong with it,” he said.

“In our day, we’d push very hard for a win and try to make batters feel uncomfortable if we are on top. The laws have changed. I understand where the ICC want to go with it but hopefully they find a balance where they don’t take emotion out of the game. I am a little bit worried.

“I still think there is a very big place for that in cricket. You don’t want to take all the aggression out of the game of cricket. You’ve got two countries playing hard cricket against each other. In a heated situation, guys are trying really hard and sometimes the emotions overflow.

The latter incident was initially deemed to be more serious, with Rabada found guilty of making deliberate and inappropriate physical contact with the then Australia captain.

He successfully overturned that verdict on appeal, instead charged with a lesser offence, but was left on a disciplinary tightrope that meant his next breach would lead to suspension.