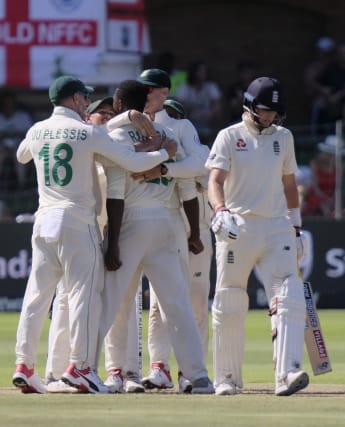 South Africa paceman Kagiso Rabada will miss the decisive fourth Test against England after his celebration of Joe Root’s wicket in Port Elizabeth fell foul of the match referee.

Rabada charged down the wicket after clean bowling the England captain on day one of the third Test, stopping just in front of him as he pumped his fists and shouted in celebration.

That drew the attention of Zimbabwean official Andy Pycroft, who charged the bowler with a level one breach of the International Cricket Council’s disciplinary code relating to “using language, actions or gestures which disparage or which could provoke an aggressive reaction from a batter upon his or her dismissal during an international match”.

Rabada was fined 15 per cent of his match fee but more importantly picked up a demerit point – taking his tally to the threshold of four in a two-year period.