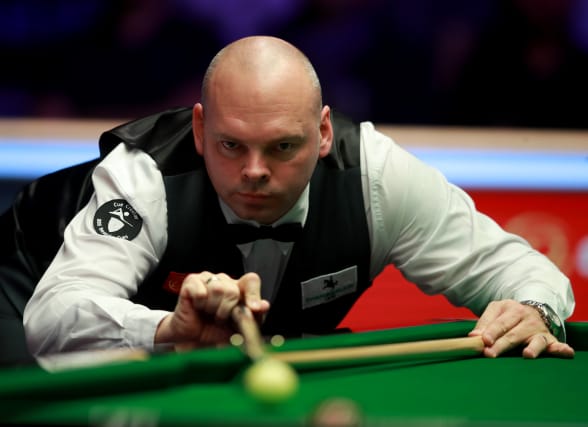 Stuart Bingham has staged a tremendous fightback to beat Kyren Wilson 6-4 and complete the Masters semi-final line-up at Alexandra Palace.

Wilson, the only top-eight seed in the last four, dominated the early stages of the quarter-final, racing into a 4-1 lead, but Bingham came strong towards the end of a match that finished after midnight.

“Adrenalin, the atmosphere gets you through it,” Bingham told Eurosport.

“It’s great when the crowd gets involved. If you can enjoy yourself and play with a smile on your face, the crowd seem to turn for you.”

Wilson made a perfect start in the opening frame with a 139 clearance, his highest break of the week, and went on to win a tactical battle to make it 2-0.

Bingham fluked a black early in the third frame before putting a run of 69 together to reduce the deficit, but he ended up coming out second best in a scrappy fourth frame as Wilson went into the interval with a 3-1 advantage.

The 2015 world champion compiled a 65 break in the fifth frame but could not capitalise and Wilson stepped in with a 71 clearance to extend his lead.

The next frame was packed with high quality safety play which left the crowd spellbound until  Bingham doubled the black to snatch it and keep his hopes alive at 4-2.

A break of 82 enabled Bingham to further narrow the gap and, playing with renewed confidence, he followed up with one of 75 to level the match.

The momentum was all with Bingham, who then made it four frames in a row to go in front for the first time.

A 36 break put Bingham halfway towards his target and a run of 20 edged him closer before a careless safety shot gave his opponent a glimmer of a chance. Wilson produced a 40 break but Bingham held his nerve to see it out.

Bingham will now take on in-form David Gilbert on Saturday evening for a place in the final.

Gilbert is two wins away from becoming only the sixth player to lift the trophy on their Masters debut after gaining a 6-2 win over Stephen Maguire.

The 38-year-old from Tamworth has climbed into the world’s top 16 after producing the best snooker of his life over the last two years and believes he is playing well enough to go all the way, having made two centuries and seven more breaks over 50 in the 12 frames he has won.

Maguire had led 3-1 in his previous meetings with Gilbert but watched his opponent reel off a 144 clearance in the opening frame – he is now the front runner for the £15,000 highest break prize – and the world number 11 took the next on the colours and then made a 91 to lead 3-0.

Glasgow’s Maguire took the fourth, helped by a run of 57, and he had chances in the next two, but a weak safety on the last red cost him frame five and he missed the last red to a centre pocket in the sixth.

Both times Gilbert cleared as he opened up a 5-1 lead and, although Maguire won the next with a 94, there was no repeating his comeback against Neill Robertson in the first round as Gilbert compiled a match-winning 77 clearance.

“I felt comfortable out there,” said Gilbert told the WST website. “The big crowd helps me to focus.

“I used to go the other way. I believe in myself now and I’m not inhibited by the scenario. I want to be out there against the best players.

“A lot of people talk about when I’m going to win a tournament and if it happened here it would be the best day of my life.”

Ali Carter will take on Shaun Murphy in the other semi-final.