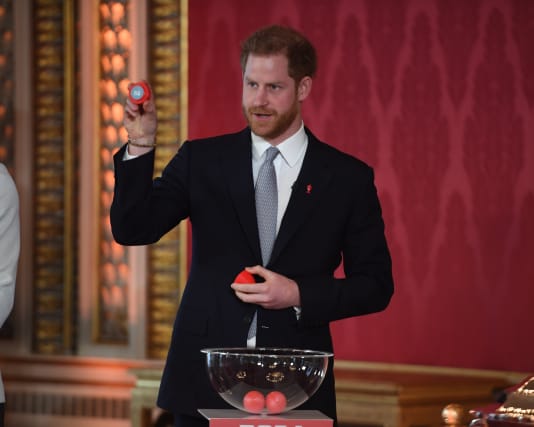 The Duke of Sussex threw up the exciting prospect of England going up against the former All Black when he pulled Samoa out of the hat in the public draw at Buckingham Palace, in his first engagement since he and his wife quit as senior royals.

It means England will kick off the tournament against the Pacific Islanders at St James’ Park in Newcastle on October 23, 2021.

Williams, who has switched codes after representing New Zealand at last year’s Rugby World Cup in Japan, played for the Kiwis in rugby league’s showpiece tournament in 2013 but is also eligible for Samoa and has yet to announce his intentions.

“I think he could be enticed to play,” said Sinfield, the Rugby Football League’s rugby director.

“I think it’d be great if he could play for New Zealand or Samoa. He’ll make that choice but he makes Samoa more of a threat with him in the side.”

“Greece are a bit unknown at this moment in time but I’m sure they’ll be competitive,” said Sinfield.

England were 36-6 winners over France in the 2017 World Cup in Perth and beat Samoa 30-10 in a mid-season international in Sydney that year.

Samoa were one of the potential opponents for England during the international window in June but Sinfield, who has completed his part of the review into the 2019 international programme, says that fixture will not be finalised until the appointment of the next head coach.

“From the fall-out and the decisions made on the back of that, it’s important that whoever our head coach is gets a say on a mid-season Test, whether it’s Samoa or a northern hemisphere nation,” he said.

The progress of Tonga, the fourth seeds who beat Great Britain Lions on their recent tour and followed that up with victory over Australia, has shown what could be achieved in Europe, according to Kear.

“Based on this last series, you’d probably rank them number one,” he said. “It shows how they have developed with homegrown players and the additional heritage players.

“I think the whole southern hemisphere has developed within rugby league. Perhaps it’s a little wake-up call for us in the northern hemisphere to develop Wales, Scotland, Ireland and France.

“If you look at Tonga, Samoa and Fiji, they are powerhouses of the game now. We need to do something within the northern hemisphere to come to that standard.

“We know a lot about Tonga but I’m delighted with the draw. PNG are notorious for not being good travellers. It’s completely different to going over there and playing them in their own backyard.

“The Cook Islands are a bit more of an unknown quantity but, should we get all the players who qualify for Wales, I’m pretty confident we can qualify for the top two, which would obviously take us into the quarter-finals.”

Scotland coach Nathan Graham was delighted to land a tie against the Kangaroos.

“If I could, I would have picked Australia, just for the chance to challenge myself,” he said. “Everybody buzzing that we’ve drawn Australia.

“People have talked about banana skin teams and, if we can turn ourselves into that banana skin team in that group, maybe knock Fiji off or challenge Australia and get some confidence, who knows what could happen?”

In the other group, Ireland were paired with 2008 champions New Zealand, Lebanon and newcomers Jamaica.

England will play newcomers Brazil in the opening match of the women’s World Cup and will also take on Papua New Guinea and Canada in the group stage, while Australia were paired with New Zealand, France and the Cook Islands.