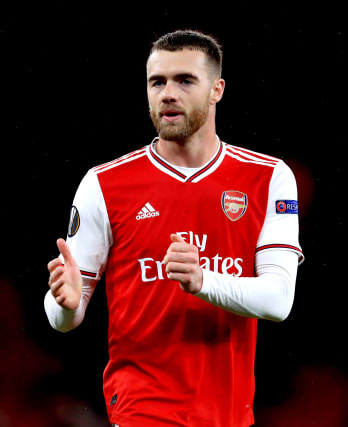 Shkodran Mustafi has been offered an Arsenal lifeline as head coach Mikel Arteta admits he currently has a dearth of defensive options.

Germany international Mustafi appeared certain to leave the Emirates Stadium either last summer or during the January transfer window having been told by former boss Unai Emery he was surplus to requirements.

But, having started just one Premier League game this term, Mustafi could be handed further opportunities by Arteta due to a lengthening injury list.

With Calum Chambers sidelined for the remainder of the season and Konstantinos Mavropanos allowed to leave on loan to Nurnberg, Mustafi is one of four central defenders available to the Gunners – along with Sokratis Papastathopoulos, David Luiz and Rob Holding.

Meanwhile, injuries to full-backs Hector Bellerin, Kieran Tierney and Sead Kolasinac has left Arsenal even shorter at the back.

Mustafi has been linked with a move away this month but, asked if he could afford to lose another centre-back, Arteta replied: “Can we afford? The ideal scenario is no.

“If it happens, we will have to invent something. We are already playing with full-backs that are not full-backs.

“They are wingers or central midfielders and could we afford to lose full-backs? No, but we don’t have any full-backs.”

Mustafi has struggled for form since moving to Arsenal from Valencia in 2016 and often comes in for criticism from the club’s supporters.

But Arteta, who has previous experience of working alongside the 27-year-old following Mustafi’s short stint at Everton, is ready to offer him a clean slate.

“I know his history at this football club, but it is up to him,” the Spaniard said.

“I told everybody from day one: ‘It is up to you guys. You show me how much you want it, you show me you are committed here, you are going to have a chance and it is going to come this week, next week or the following one’.

“They are all going to have the chance to play. After it is up to them to show it.”

With his depleted numbers in defence, Arteta may yet dip into the January transfer market.

He ruled out a move for Manchester City’s John Stones earlier in the week but the club has since been linked with Paris St Germain full-back Layvin Kurzawa.

“We have a lot of issues at the back, the fact that Calum got the big injury is modifying our plans,” Arteta said before speculation over a move for Kurzawa emerged.

“We have to put 11 players out on the pitch on Saturday and I am sure we will. They will try their best, and I will try to select the ones who in my opinion are the best fit for that game.”

Arteta will at least have an extra option in attack after deciding against sending Eddie Nketiah back out on loan.

The England Under-21s striker spent the first half of the season at Leeds but was recalled due to a lack of game-time and was expected to join another Sky Bet Championship club for the remainder of the campaign.

However, having trained with the first-team since his return, Arteta has been suitably impressed by Nketiah and will now keep hold of the 20-year-old.

He could even feature against Sheffield United on Saturday and is likely to be named on the bench, with captain and top goalscorer Pierre-Emerick Aubameyang serving the first of a three-match ban.