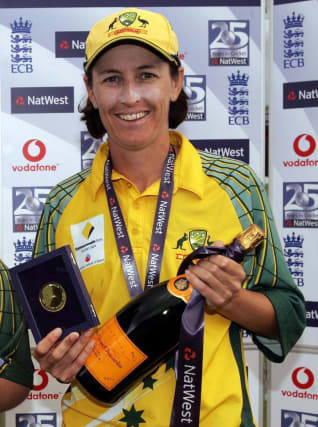 New England Women’s head coach Lisa Keightley has challenged her players to reach the final of the ICC Twenty20 World Cup in Australia next month.

The 48-year-old has replaced Mark Robinson and will not have long with the squad before she is thrust into the pressure of a major tournament.

Her native Australia are hosts for the T20 World Cup, which gets underway on February 21, and holders after they beat England in the West Indies in 2018.

It was a disappointing end to the competition for Heather Knight’s side after they were all out for 105 in the final, but Keightley hopes they can match that and start to compete with Australia again after a 12-4 defeat in the multi-format Ashes series this summer.

“As a coach you want to get your team as competitive and winning as many games as you can. I think Australia are really strong and in the Ashes they got on a roll and England lost key moments in the first two games.

“If England had won those key moments it could have been slightly different. What I will be looking at is are the players doing their key strengths really well and are we converting. That is what we’ll need to do in the World Cup.

Keightley, who was the first woman to score a century at Lord’s in 1998, feels Australia are favourites to win on home turf.

England will avoid them until at least the semi-finals after being placed in Group B and the former Perth Scorchers head coach knows momentum is key.

“The Aussies are definitely favourites, most people would say that, but I know (Australia’s head coach) Matthew Mott,” Keightley added.

“He won’t let them rest on their laurels. He knows competitions like the World Cup, it is all about playing well at the right time.”

Keightley wants England playing a positive brand of cricket, starting with the Tri-Series in Australia – which precedes the T20 World Cup – against Mott’s team and India at the end of January and beginning of February.

She added: “I want us to bowl teams out, put pressure back on the bowlers as soon as we can and put teams under pressure as early as we can.

“I want us to be positive, to play with confidence and freedom because they know their game and strengths and under pressure I’d hope they would go to their strengths.”

Keightley was set to coach London Spirit in The Hundred before successfully applying to replace Robinson and in the process becoming the first full-time England Women’s head coach.

This is not her first role in the UK, with the Australian coaching England Women’s academy between 2011 and 2015.

“I suppose for me wanting to be involved in international cricket, it is just a fantastic time,” Keightley said.

“Women’s sport across the world is building momentum and it is a really good time to be involved.

“I think the Australian T20 World Cup will set that standard again that England set here for the 50-over World Cup (in 2017). I hope it goes to the next level.”