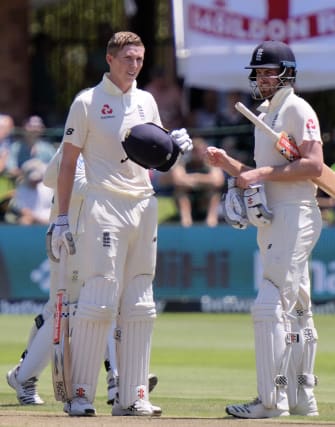 Openers Dom Sibley and Zak Crawley put on an unbroken stand of 61 as England took advantage of a benign pitch on the first morning of third Test against South Africa.

As he had done in Centurion and Cape Town, Joe Root won the toss and this time happily sent his batsmen in on a lethargic track at St George’s Park.

Sibley (30 not out) and Crawley (20no) took care of the rest, settling themselves at the crease after Proteas captain Faf du Plessis handed the new ball to debutant Dane Paterson rather than strike bowler Kagiso Rabada.

When he did get his hands on the ball Rabada almost struck with his third delivery, Crawley taking on the pull with just eight to his name only for his mis-controlled lob to narrowly evade mid-on.

Sibley enjoyed sparring with the pacy Anrich Nortje, twice beating the man at point and producing the shot of the morning when he split the fielders at short-midwicket and mid-on with a firm drive.

While Vernon Philander was struggling enough for wicketkeeper Quinton de Kock to stand up to stumps just seven overs in, Nortje picked up the pace in a lively second spell. Still, the closest he came to a breakthrough came when Sibley’s edgy uppercut soared high above the slips and skipped to the rope.

Crawley brought up the England 50 with a squirt to third man, then survived an lbw shout while sweeping Keshav Maharaj late in the session.

England had earlier handed Mark Wood his first competitive appearance since he tore his side in the World Cup final six months ago. Wood was preferred to Chris Woakes as the replacement for the injured James Anderson, Jofra Archer having lost his own fitness battle with a painful right elbow.