Tottenham’s Tanganga: Best bit of my week to remember was smile on dad’s face 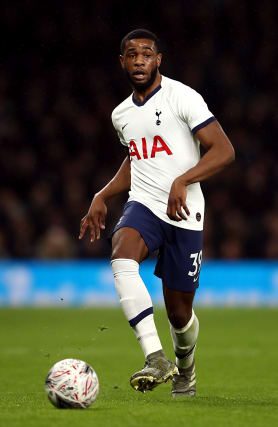 Japhet Tanganga admits the best bit of his week to remember at Tottenham was seeing the smile on his father’s face.

The 20-year-old has burst on to the scene at Spurs over the past few days as he followed an impressive Premier League debut against Liverpool on Saturday with a man-of-the-match performance in Tuesday’s 2-1 FA Cup replay win over Middlesbrough.

Prior to last weekend, his only senior appearance for the club where he has come through the ranks was in the Carabao Cup at Colchester in September.

His rise to prominence under Jose Mourinho has come as a bit of a surprise and seems a long way from playing in the youth ranks, where his parents were cheering him on from the touchline.

“My mum’s not here right now, she’s on holiday, but my dad was there and he was really pleased,” he said.

“I was really happy to just see the joy on his face.

“He’s worked so hard for years, you know, taking me to football, sacrificing time off work to take me to games, standing there in the cold watching me when it’s raining.

Tanganga signed a one-year contract last summer, but it is understood that there is an option for the club to extend.

That will be a formality and Tanganga, who joined the club as a 10-year-old, wants to stay for his entire career.

“I’ve been at Tottenham for a long time, since I was 10 and they’ve helped me a lot,” he added.

“This club is fantastic, the staff, the coaches, everyone has just helped me. The club means a lot to me, having been with them for so long.

“Of course I’d love to stay with them as long as I could and go on until I retire.

“But that’s for the club to deal with me and for me to focus on the pitch and deliver as much as I possibly can.”

Such has been his quick integration into first-team life, Tanganga would not divulge whether he had his own locker in the dressing room as his only focus is on cementing himself into Mourinho’s plans.

“I don’t know if I can say that. That’s for you to find out from someone else,” he said regarding a locker.

“My work is to just keep working with the first team and the manager wants to do what he wants to do. It’s up to him.

“At the moment my focus is to keep working, keep getting opportunities to play and try to establish myself in the team.

“Hopefully the manager will keep encouraging me and keep working with me to allow me to do that.”

Boro put up a decent fight at Spurs, but they were always facing an uphill battle after conceding two goals in the opening 15 minutes.

Midfielder Adam Clayton said on BBC Tees: “We dug in. A lot of teams would have been done three, four, five, they have done that to teams in the Premier League.

“We could have nicked it at the end, taken it to extra-time, but it wasn’t to be.

“Friday (against Fulham) is the most important thing and we are straight on recovery and getting ready for that.”