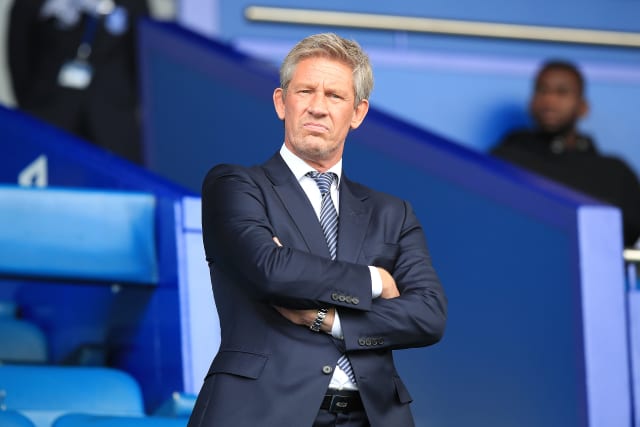 Director of football Marcel Brands admits Everton cannot afford to buy players at the top end of the market despite a transfer spend of more than £480million over the last four seasons.

The Toffees’ annual spend has ranged between £85million and £150million since billionaire Farhad Moshiri took a majority shareholding in February 2016.

But, after the club announced record losses of £111.9million, and with a £500million new stadium at Bramley-Moore Dock to finance, Brands accepts the numbers just do not add up for them to be spending £60million-plus on one player.

“Look at last summer, from the start there was a lot of rumours and news that we would like to take (Wilfried) Zaha,” he said.

“Of course, we want to get the best players, but we have to be realistic if you see our numbers.”

Brands is currently overseeing his fourth transfer window since being appointed by the club in May 2018.

He acknowledges the 68 deals in or out they have done in that period is “far too many”, and the Dutchman is looking to bring some stability to the process.

However, he is still looking to move on unwanted players and will try to offload defender Cuco Martina and striker Oumar Niasse in this window, having loaned Cenk Tosun to Crystal Palace last week, while also looking for a right-sided midfielder to give new manager Carlo Ancelotti an alternative to Theo Walcott.

“We’re currently in the fourth transfer window since I have been here and we have done almost 70 deals – and that is quite a lot,” he told the club’s general meeting.

“Far too many, I think, for a football club like Everton. When I started we had a lot of players and we had to start looking at a new squad, younger players and create some value on the pitch again.

“Because Carlo has changed the system a little bit, with 4-4-2, it means we have quite a lot of options now in central midfield, but looking a little bit less on the right side in this new system.

“Hopefully everything gets a little bit stabilised and Everton should get to a situation where we do, say, two or three deals coming in and a couple of deals going out.”

Everton’s main problem this season has been goals, with just 25 in 22 Premier League matches with Richarlison and Dominic Calvert-Lewin both on eight and the next highest, Bernard, managing just two.

Moise Kean, a £29million summer signing from Juventus who was supposed to rectify the problems up front, has yet to score in 20 appearances in all competitions.

Brands, however, tried to explain why relying on one player was not necessarily the answer.

“Before I came in, we had (Romelu) Lukaku who scored 25 (league) goals. It was not easy to replace that one by one,” he said.

“But, for example, in the year Lukaku scored 25 goals there were three players – Lukaku, (Kevin) Mirallas and (Ross) Barkley – together scored 34 goals.

“I think sometimes we need a little bit of patience, especially with younger players.”