Tanganga had no fear about making Premier League debut against Liverpool 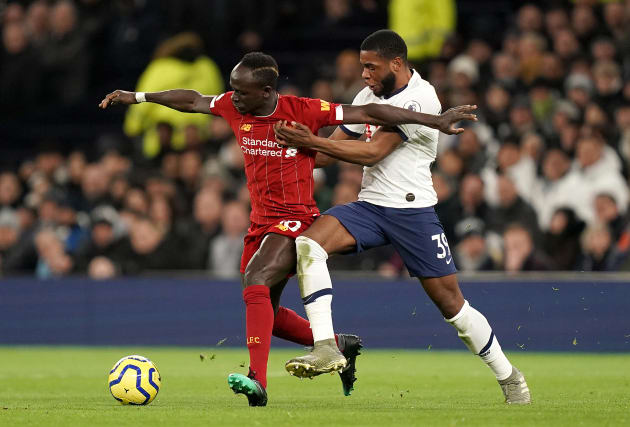 Tottenham debutant Japhet Tanganga has revealed he told Jose Mourinho he was not scared by the prospect of making his Premier League bow against Liverpool.

The 20-year-old centre-back was a surprise selection against the champions elect as, having only played a League Cup tie for Spurs earlier this season, he was thrown in at right-back.

He produced a performance to remember, keeping Sadio Mane quiet, but ended up on the losing side as Roberto Firmino’s first-half goal kept Liverpool’s unbeaten season in tact.

Spurs have had a full week on the training ground and Tanganga was asked by Mourinho whether he would be scared to face the Reds.

“The gaffer mentioned something on Tuesday. He asked me if I want to play, I said ‘Yeah’, he said ‘You wont be scared?’, I said ‘No, I wont be scared’,” Tanganga revealed.

“Then we did a bit of shape two or three days before the game and I thought, ‘Yeah I’m in the team’.

“The boys have been excellent, cheering me on, encouraging me and letting me know it is just another game.

“As much as it is my debut, as much as I am playing against probably the best team in the league right now, it doesn’t matter.

“They were just great, I am grateful for the manager having trust in me.”

Spurs put up a fight in the second half and should have earned a point but Son Heung-min and Giovani Lo Celso missed big chances.

It is a day that Tanganga will always remember, but admits it is “bittersweet”.

“I was happy to make my debut but I really thought we could have nicked something at the end of the game. Maybe a draw, maybe a win,” he added on Spurs TV.

“It means a lot. It means a lot, from young you dream about it, you see guys on TV and you think, ‘I want that’.

“It would have been much better if we had won the game, but I am happy to make my debut.

“I have made my debut now, but it has gone now. I will celebrate with my family and then it is on to the next one.”

Team-mate Toby Alderweireld, one of Europe’s top defenders, thinks the youngster has a big future.

“He showed with the high step up that he can cope,” he said. “He’s 20 years old. He’s a guy who has a good head as well, he knows what he’s doing, he’s trying to improve and that’s the most important thing.

“He has to go from here but he can be very happy with his performance.”

Firmino’s ninth Premier League goal of the season won the day for Liverpool as they have now taken 61 points from a possible 63 – the best ever start to a campaign in any of the top five European leagues.

Although Spurs made life difficult in the second half, it could have been wrapped up had Jurgen Klopp’s men been more clinical.

And Klopp revealed that the Brazilian’s first words at full-time were apologetic ones.

“When I went to him and wanted to give him a hug after the game, he wanted to stop and talk first,” Klopp explained.

“He said, ‘I know I should have scored more goals’… it was absolutely not what I wanted to say.

“It is true probably, but I didn’t even know exactly. He should have immediately with the first chance: it was brilliant play and then he hits somehow the defender.

“Yes, [he is] a super player, super. I don’t say this for the first time and will hopefully not say it for the last time. Pretty impressive.”