Rashford at the double as Man Utd sink Norwich 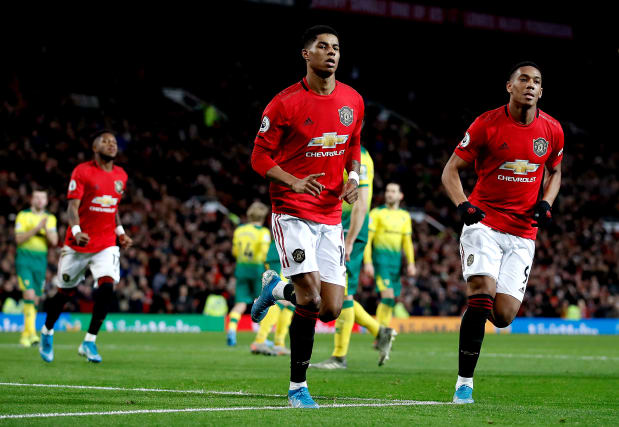 Rashford opened the scoring after 27 minutes of a one-sided encounter and then added a penalty before further goals from Anthony Martial and the increasingly impressive Mason Greenwood.

United, responding well after their midweek Carabao Cup humbling by Manchester City, could even have won more convincingly as Norwich surrendered meekly.

The loss leaves the Canaries five points adrift at the foot of the table having played a game more than the sides immediately above them.

Norwich had perhaps hoped for a fillip from 18-year-old Adam Idah following his FA Cup hat-trick against Preston.

Idah was handed his full Premier League debut with Teemu Pukki out injured but, after last week’s heroics, with little service, this proved a chastening experience.

United’s afternoon, by contrast, started well as Harry Maguire, sorely missed in the midweek horror show against City, proved his fitness to start.

The hosts did take time to hit their stride, or indeed create any meaningful opportunities, but there was no doubting their superiority as Norwich struggled to break out of their own half.

All Norwich could do was defend and, although they looked comfortable early on, they invited too much pressure.

United finally broke through as Juan Mata cut inside from the right and lofted a delightful cross to the back post where Rashford volleyed past Tim Krul at close range.

Hitherto slightly sluggish, the goal lifted United and they created a series of further chances in quick succession. Andreas Pereira and Rashford both shot at Krul from distance and Fred curled a low effort narrowly wide.

A mistake by Norwich also allowed Mata to pick out Anthony Martial in the box but the Frenchman dwelt too long and Christoph Zimmermann cleared.

Norwich finally began to threaten just before the break but United survived. First a fine last-ditch tackle inside the centre circle from Aaron Wan-Bissaka prevented an Idah breakaway and then David De Gea produced a fine low save to keep out a Todd Cantwell strike.

That was as good as it got for the visitors as United put the result beyond doubt with two more goals in the opening nine minutes of the second half.

Rashford tucked away his second of the afternoon from the penalty spot after Krul was adjudged to have brought down the flying Brandon Williams.

Martial then claimed United’s third with a powerful header from another Mata cross.

Williams should have added another for United soon after but somehow scooped over from two yards after Pereira had squared from a Martial pass.

Norwich did have another chance but Alexander Tettey blazed well over and normal service was soon resumed as Greenwood came off the bench to complete the scoring 14 minutes from time.

Showing more of the composure that has emphasised his rise to prominence this season, Greenwood wrong-footed two Norwich defenders on the edge of the box before firing a low shot past Krul.