Guardiola: I want to help young players – but demand for success makes it hard 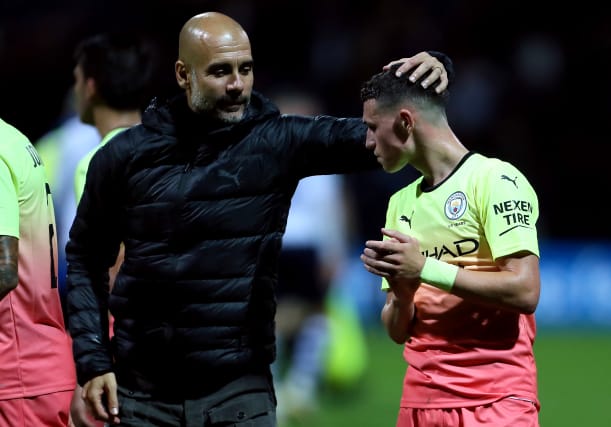 Pep Guardiola will continue to exercise caution over the introduction of young players to his Manchester City side.

With the champions having fallen well behind Liverpool in the Premier League title race this season, there are growing calls for 19-year-old Phil Foden to be handed a regular starting place.

Fellow teenagers Eric Garcia, Taylor Harwood-Bellis and Tommy Doyle have also been tipped for bright futures, having had a taste of first-team action in recent weeks.

Yet, with City still chasing success in two domestic cup competitions and the Champions League, manager Guardiola admits he cannot afford to take too many risks on inexperienced players.

Guardiola said: “I would like to help the young players here but this is a club that is so demanding. You have to win games. Even when you win four titles here it isn’t enough – and that is the truth.

“We won four titles last season and it wasn’t enough because we didn’t win the Champions League.

“That is the reality – and the young players here have to compete against incredible central defenders and incredible midfielders.

“It is a tough reality that exceptional players like Phil Foden don’t play the minutes they should because we have other incredible players.”

Guardiola continues to talk up Foden’s ability, even though the midfielder has started just eight games in all competitions this term.

It is anticipated the England Under-21 international will get many more opportunities after veteran playmaker David Silva leaves the club at the end of the season.

Guardiola said: “Phil is an incredible player but he still has things to improve. Sometimes it takes time to understand exactly what he has to do, sometimes you have to be patient.

“But David is going to leave this season and we are not going to buy any player in his position because we have Phil. We trust Phil. If with we didn’t believe in him we might go to the market to replace David, but we have Phil.”

That Foden is considered a ready-made replacement for Silva is a bonus for the club as gradually the stars of their early successes in the last decade move on. The likes of Joe Hart, Yaya Toure and Vincent Kompany have already left, leaving only Silva and Sergio Aguero of the 2012 vintage.

Guardiola, whose side travel to Aston Villa on Sunday, said: “Vinny is unique, Sergio unique, David too. These kind of players are incredible but this club has the duty and obligation to find the best replacements for all of them, and as quick as possible and anticipate it. We have to find them or build them from here.

“Clubs move on, people arrive, people move. You live the experience but you have to move on.”