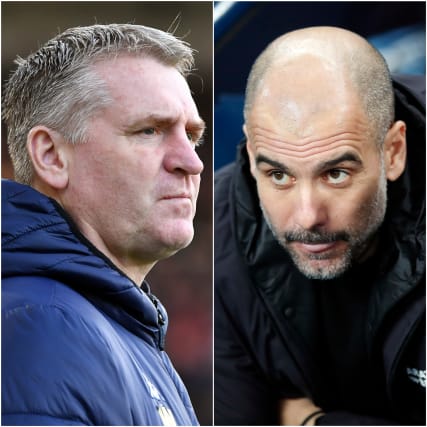 Champions Manchester City could be 17 points behind Liverpool before they travel to Villa Park on Sunday.

They are third in the Premier League with hopes of a third straight title in tatters.

“I must be doing well if Pep’s getting criticism, dear me,” said the boss, with 17th-placed Villa aiming to cause an upset.

“He is an unbelievable coach. What Jurgen Klopp’s doing this season is incredible but they’re doing it week in, week out.

“You have to look at the last two years and what City have done and even this year. The biggest surprise this year is they’ve lost five in the Premier League, which is usually unheard of.

“Watching them, it (their level) doesn’t seem to have dropped at all. Liverpool have stepped up and City are still fighting with them. Although 14 points behind they’ll still have belief or hope Liverpool can fail and they can catch them.

“It’s getting harder and harder for them.”

City have lost five times this season – including once to Norwich and twice to Wolves.

But they still defeated Manchester United 3-1 in their Carabao Cup semi-final first leg at Old Trafford on Tuesday.

Inspirational ex-captain Vincent Kompany left at the end of last season and David Silva is leaving in the summer with Sergio Aguero expected to quit at the end of his current contract in 2021.

But Smith, who is close to landing former Liverpool goalkeeper Pepe Reina on a six-month loan deal from AC Milan, believes City will be able to handle losing their big names.

He said: “Yeah, they (Kompany, Aguero, Silva) may be going but then they’ve got Jesus, Sterling, Bernardo Silva.

“They are some team. I love watching them. After we beat Burnley I went to watch them against Everton and we all saw what they did against Manchester United.

“They have tremendous players with a tremendous coach. Some players may be coming to the end of an era at that club but it grows their players very quickly into how they want to be.

“They never lose sight of their style and what they stand for.”