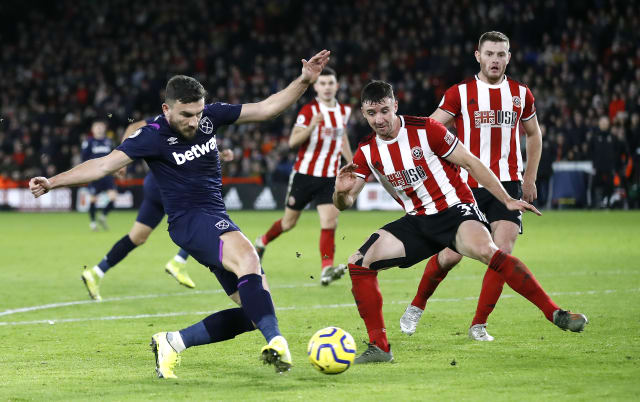 Chris Wilder celebrated signing his new Sheffield United contract with victory against West Ham, who were denied a dramatic injury-time equaliser by VAR.

Since taking charge in the summer of 2016, the Blades boss has taken his boyhood team from League One to fifth in the Premier League following Friday night’s 1-0 win

Wilder signed a deal until 2024 prior to kick-off and then saw club record signing Oliver McBurnie score the only goal of the game early in the second half, following a glaring mistake by West Ham’s substitute goalkeeper David Martin.

Former Leeds midfielder Robert Snodgrass, another Hammers sub, looked to have salvaged a draw for the visitors right at the end but replays showed that the ball had hit Declan Rice’s arm in the build up.

The VAR decision was greeted like a second goal by the Bramall Lane faithful and ensured the Blades returned to winning ways following a tough festive period that saw them face Manchester City and Liverpool in back-to-back away matches.

The first half never really got going as an unadventurous West Ham stifled the Blades with their organisation, but still had the better chances on the counter attack.

John Egan powered a header over the crossbar from Oliver Norwood’s corner as the visitors survived an 11th-minute scare. However, it was to come at a cost as from the resulting goal kick Lukasz Fabianski suffered an injury.

The Hammers goalkeeper, who only returned from a three-month absence on December 28 following hip surgery, winced in pain as he cleared the ball and immediately signalled to the bench before sitting on the ground in dismay.

He received treatment on the pitch for a couple of minutes before Martin replaced him between the posts.

Sebastien Haller should have done better than shoot waywardly high and wide when getting the better of John Lundstram inside the penalty area.

At the other end, Lundstram’s volley looked destined for the bottom corner of the net until Fabian Balbuena stuck out a leg to make a block.

Felipe Anderson should have opened the scoring on the half-hour mark. A clearance up the centre of the pitch by Martin was mis-read by Egan as the ball flicked off his head and into the path of the Brazilian. However, Anderson skewed his shot wide from just inside the box.

The hosts started the second half with gusto. John Fleck’s thunderous 20-yard strike was blocked by Pablo Zabaleta before the Blades midfielder sent a second shot from the rebound narrowly wide.

Fleck was involved again when Wilder’s team took the lead shortly afterwards, but West Ham were the masters of their on demise.

Martin tried to find Balbuena, who was just outside the penalty area, with a goal kick but his pass was loose and Fleck pounced. With Balbuena outnumbered two against one, Fleck was able to set up McBurnie and he steered the ball beneath Martin from 10 yards out.

Haller had the ball in the net midway through the second half but the £45million summer signing was denied his seventh goal of the season by an offside flag.

Martin went some way towards making amends for his costly error when he saved with his legs to deny Mousset, who was through on goal inside the penalty area.

The game had become end-to-end and Dean Henderson was called into action for the first time after 78 minutes, diving to his right to get a strong hand behind the ball to keep out Manuel Lanzini’s free-kick.

Henderson denied the Argentine again shortly afterwards when a slip by Egan on the right side of the area allowed Lanzini a sight of goal, but the Blades goalkeeper made a block by his near post.

West Ham kept their hosts under pressure and looked to have been rewarded when Rice pounced on the ball in midfield and made a driving run towards the penalty area.

He teed up Snodgrass, who slotted his low finish between the near post and Henderson, before VAR had the final say.