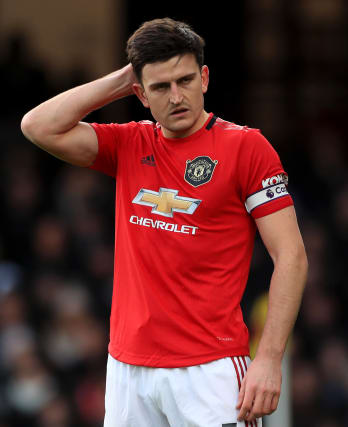 The defender suffered a hip injury in last weekend’s FA Cup draw with Wolves and there had been reports he could be sidelined for several weeks, but United boss Ole Gunnar Solskjaer insisted the problem is not serious.

The Norwegian said: “He’s got a chance for tomorrow. It’s a minor thing. I don’t know where the reports are coming from. You might have mistaken him for Harry Kane. He’s going to go through training today and see how he reacts for tomorrow.”

Solskjaer addressed speculation linking Ashley Young with a move to Inter Milan and hinted the United captain will be staying at Old Trafford.

“He’s one of our players, he’s our captain,” said Solskjaer. “There’s been lots of speculation and we’ve just got to handle that. Ashley’s been very professional and focused and I don’t think that’s going to change.”

Young has had limited playing time this season, and Solskjaer added: “That’s a discussion me and Ash will have if something comes up. We haven’t got too many players fit and ready so we need the ones we have.

“Ashley’s been very, very good for this club and he’s been a very good captain this season. Let’s see where we are in June and in February as well.”

Solskjaer expects to see a reaction on Saturday following the disappointment of Tuesday’s 3-1 defeat by Manchester City at Old Trafford in the first leg of the Carabao Cup semi-final.
“Of course you’re disappointed when you lose a game against your local rivals,” he said.

“But which way is there to go? Do you feel sorry for yourself or do you knuckle down and get ready for the next one?

“One of the worst traits a footballer can have is feeling sorry for himself. The boys have been focused. It’s been a disappointing feeling because we know that wasn’t the game we wanted but that’s football and I’m sure we’ll get a reaction tomorrow.”