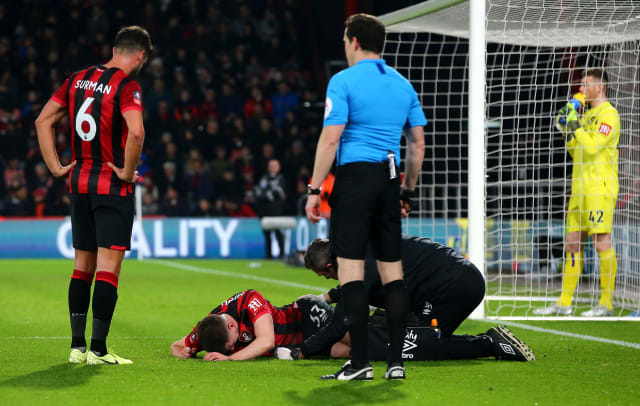 Bournemouth defender Chris Mepham is expected be out for up to three months with a knee injury, the PA news agency understands.

The Wales international is thought to have suffered ligament damage during the FA Cup third-round win over Luton.

The news of Mepham’s absence will be a blow to manager Eddie Howe, whose depleted squad have slipped into the Premier League relegation zone.

Earlier on Friday, Howe had spoken of being hopeful the club’s injury crisis was set to ease.

Striker Sam Surridge had been recalled from a loan spell at Swansea as cover and could be drafted into the squad again for Sunday’s home match against fellow relegation battlers Watford.

Howe did not give any details of Mepham’s knee injury when he was asked for a fitness update in his pre-match press conference on Friday morning.

“We’re getting there with some, there are a couple of problems with others,” the Bournemouth manager said.

“The long-term absentees won’t change but there are a couple who are getting really close.

“We’ll wait and see, there are a few last-minute decisions for me to make.”

Howe added: “We trained this week in small numbers and I’ll make a late call on a couple of others.”

After claiming just four points from the past 10 matches since beating Manchester United, the Cherries have slipped down into the relegation zone.

The 4-0 win over Luton provided some much-needed home cheer following on from another disappointing defeat at West Ham on New Year’s Day.

Bournemouth host Watford on Sunday, a team just a place and a point below them in the table, and will then head to bottom club Norwich.

Brighton and Aston Villa also come to the Vitality Stadium in the next few weeks.

Howe knows now is the time to deliver a consistent spell to push back up the table.

“We have got a key run coming up against teams in and around us and that’s going to make the difference in our season,” the Bournemouth manager said.

Howe wants his side to make their compact ground a tough place to visit once again – having won just twice at home in the league so far.

“We (do it) by winning and creating that feeling we are invincible here,” Howe said at a press conference broadcast on the club’s website.

“Teams used to really fear coming here. It is a tight stadium, a small ground obviously, but with a really good atmosphere.

“There’s no blame on the crowd because we haven’t performed well enough here consistently this season, with only a couple of wins – it is not enough.”