Great Britain knocked out of ATP Cup by Australia 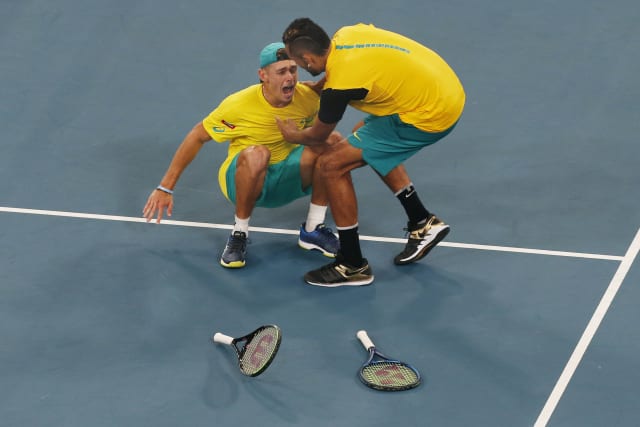 Great Britain were knocked out of the inaugural ATP Cup after losing their quarter-final tie 2-1 to Australia.

Alex De Minaur and Nick Kyrgios collapsed to the court and held each other after winning the final point in the doubles against Jamie Murray and Joe Salisbury.

It had been a thrilling match, Murray and Salisbury winning the first set 6-3 before losing the second 6-3 and taking the crowd at Ken Rosewall Arena to a tie-break.

Kyrgios served at 17-16 and Salisbury returned long, but before the win could be given the British challenged whether the world number 29’s serve had gone in.

The review showed it clearly had and the unlikely pair fell to the ground.

The Australian duo were a surprise choice, team captain Lleyton Hewitt sending them in at the last minute ahead of Chris Guccione and John Peers.

Earlier, Cameron Norrie lost the first match of the day 6-2 6-2 to Kyrgios, before Dan Evans continued his strong return to the game with a hard-fought 7-6 4-6 7-6 (2) win over De Minaur.

The Australian survived four match points to force a tie-break, before Evans proved too strong on his own serve and the Australian returned wide to end proceedings.

Australia now progress to the semi-finals, where they will meet either Belgium or Spain.