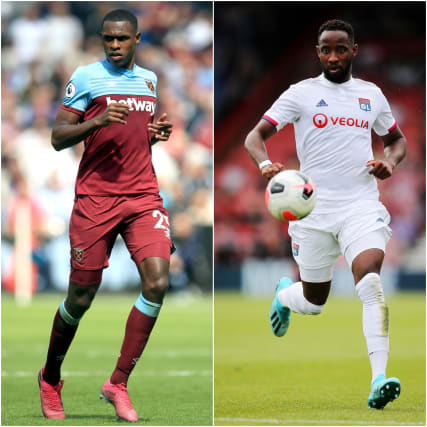 Chelsea will target Issa Diop with a £40million offer, the Daily Express reports. West Ham’s French centre-back impressed despite the club’s struggles under former manager Manuel Pellegrini, making him Frank Lampard’s top defensive target now that the Blues’ transfer ban has been lifted. The Hammers want £50m for the 22-year-old, with Lampard set to compete with Tottenham for the big defender.

Chelsea and Manchester United both sent scouts to watch striker Moussa Dembele score for Lyon in a 3-1 French League Cup win over Stade Brest, according to the Daily Mail. It was reported that Lyon rejected a Chelsea bid for the 23-year-old last week, but the Mail says the Londoners remain keen. The Red Devils need a replacement following Romelu Lukaku’s departure last summer, with the side becoming overly dependent on goals from Marcus Rashford and Anthony Martial during this campaign.

Tottenham look likely to grant Crystal Palace’s request for Kyle Walker-Peters on a six-month loan, the Daily Mail says. The 22-year-old has struggled to get on the pitch this season, with just one start in the Carabao Cup and another in the Champions League since December. Spurs are willing to let the full-back leave temporarily if a fee is paid by the south Londoners.

Manchester United and Arsenal have reportedly submitted offers for Paris St Germain striker Edinson Cavani. The 32-year-old’s contract expires at the end of the season, with Atletico Madrid front-runners for the Uruguay international, Metro reports citing El Chiringuito. The Gunners and United will also have to compete with Inter Milan for the man who has scored 196 goals in 290 games for PSG.

Pepe Reina: The former Liverpool custodian, 37, is about to be signed by Aston Villa form AC Milan, according to AS.