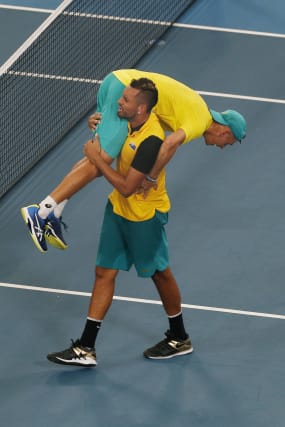 An intense encounter went to the wire before Australia eventually prevailed 3-6 6-3 18-16 to advance to the semi-finals and a meeting with either Belgium or Spain.

Australia had to wait to celebrate, with Britain challenging whether Kyrgios’ serve landed on the service line after Salisbury missed a backhand return on Australia’s fifth match point, but once confirmed De Minaur and Kyrgios collapsed into an embrace on court.

“It was unreal,” Kyrgios said on the ATP Cup website. “The adrenaline has kind of worn off and I’m exhausted after that match. It was awesome.

“Today was probably one of the best moments in my career, definitely. Just making it through to the semi-final, the first-ever ATP Cup in that type of fashion, was pretty special… we genuinely care for each other, and (our team-mates) were genuinely just so ecstatic to get through.”

Speaking on court in the immediate aftermath, Kyrgios had joked he would need “a bit of red wine” to unwind after such a dramatic encounter.

“That was probably the most stressful tiebreak I’ve ever played in my life,” the 24-year-old said.

Britain had four match points of their own, but Murray was left to rue a missed backhander on top of the net.

“I missed that shot basically on top of the net, which was ridiculous,” he said. “We hung in and we did well. We just couldn’t quite get the last point. Yeah, we lost. I mean, that was it.”

Earlier Dan Evans had beat De Minaur in the first singles match to force the decisive doubles contest, winning 7-6 (4) 4-6 7-6 (2) in a marathon contest which lasted three hours and 24 minutes.

“That’s why I play sport is for occasions like that. I enjoyed it,” Evans said. “It hurt a bit, but I enjoyed every minute of it out there.

“Hopefully everyone in the crowd enjoyed it, as well. I was just proud to put a point on the board for the guys and we obviously didn’t, but it was hopefully to go out there and get the win and win the tie, but that’s the way it goes.”