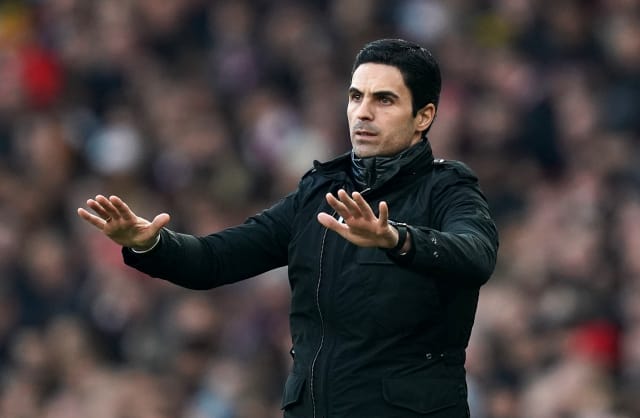 Mikel Arteta has warned Arsenal supporters not to expect “big things” in the January transfer window.

And the Gunners head coach revealed talks over a new deal for captain Pierre-Emerick Aubameyang will be put on the back burner until the summer.

The Gunners are unlikely to make any permanent signings this month after a hefty outlay in the summer.

They broke their club transfer record to recruit Nicolas Pepe as well as completing moves for David Luiz, Gabriel Martinelli, Kieran Tierney and William Saliba – with the latter then rejoining St Etienne on loan.

Those deals equated to a reported total in excess of £135million, meaning the well for January signings is all but dry.

“I’m expecting big things from the players I have at the moment, the players that are recovering from injuries. That’s the biggest expectations from my side.

“If we can find something to help us go through the season in a more balanced way in certain areas, and which is helpful, we’ll look at the options.

“We always have to be looking because obviously we have some bad injuries for players who are going to be out for a long time. We have to see if we can find options there.”

Arteta has overseen victories in his last two games, a 2-1 Premier League win over Manchester United before a hard-fought FA Cup third-round success against Leeds on Monday night.

Ahead of the tie with Leeds, Aubameyang used his column in the club’s matchday programme to insist speculation he was angling for a move away from the Emirates Stadium was wide of the mark.

“I would also like to react to some of the rumours that are going around about me in the media,” he wrote.

“People like making up stories and they should focus on what’s happening on the pitch. They talk too much and it does my head in!

“I am the Arsenal captain. I love this club. I am committed to it and desperate to bring it back to the top, where it belongs.”

Aubameyang’s contract expires at the end of next season and Arteta, who said he was “thrilled” to read the Gabon striker’s programme notes, said any talks over an extension will not take place until the end of the current campaign.

Asked if he was confident Aubameyang would stay, Arteta replied: “I don’t know, we haven’t discussed that. But I’m confident that he’s very happy here because that’s what he said in the media.

“I was very pleased to read those comments. He knows exactly what I think about him and obviously he’s a massive player for us.”

Pushed on if talks would take place in the summer, Arteta added: “My intention is to keep Auba obviously because I know that if we keep Auba with us, we’re going to be stronger and closer to winning football matches. That’s the only thing.

“But at the moment we’re in the middle of the season and we haven’t discussed anything further on that at the club.”