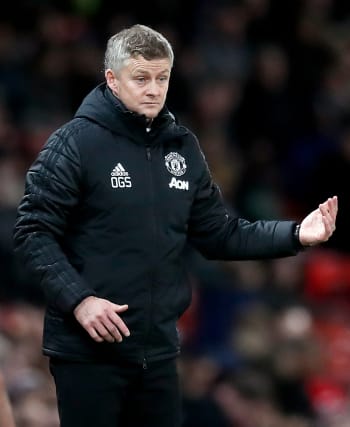 Manchester United manager Ole Gunnar Solskjaer insists he has the backing to strengthen the squad in January but will only do so if the right signings are available.

The 3-1 home derby defeat to Manchester City in the first leg of the Carabao Cup semi-final highlighted the gulf between his side and the Premier League’s very best.

At Old Trafford they were technically inferior to their neighbours and with £80million centre-back Harry Maguire out injured they looked to be lacking in leaders during a bewildering first half in which they were given the runaround.

Solskjaer has stressed there is no quick fix to restoring the club’s fortunes and while short-term options are open to him he did not sound overly confident the solutions would be found in this transfer window.

“We are a young team and with the injuries we’ve had and illness it shows more and that’s something we are looking at,” he said.

“If there is something there for us I’ve got the backing to do something but if it is not the right thing we won’t do anything.”

Asked about comparisons with City and Liverpool, not only technically but from a character point of view, and how United can close the gap the Red Devils boss added: “I’ve said before it’s not going to be a quick fix, the two teams you are talking about are two of the best teams in the world.

“It’s natural that your head goes down when you don’t feel that you are performing but have to get out of it quicker, we have to get to that second-half mentality (against City) quicker. It can’t be me coming in at half-time.

“This is a young team and we are still learning and these experiences must stick, the second half gives me something to believe in because that is respectable and a good second half.”

Speculation emerged on Tuesday linking Ashley Young with Inter Milan but Solskjaer insists they cannot afford to allow players to leave if it is going to have a detrimental effect on the squad.

“We need the players we have in the squad,” he said.

“We’ve got a few months left of the season and we can’t weaken ourselves, we need to strengthen if any movement is going to happen.”

Solskjaer is optimistic Maguire, missing with a foot injury sustained in the goalless FA Cup draw at Wolves, will not be out for too long and is confident Phil Jones’ problem late on was only minor.

“We don’t know (about Maguire). He’s not going to be long term but I don’t think he’ll be ready for the weekend but let’s see.”

On Jones he added: “Cramp. It’s his first 90 mins for a while (since October) and he came through it.”