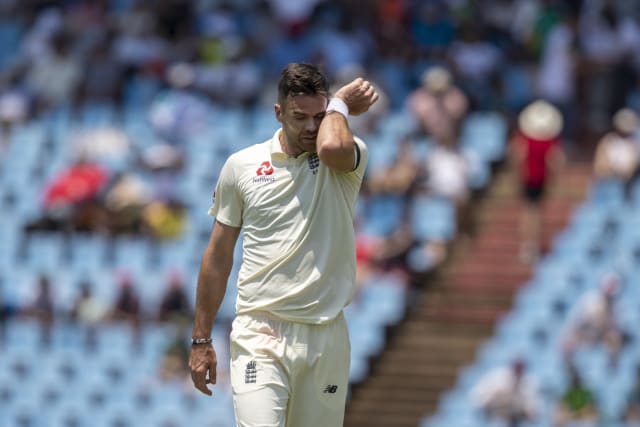 James Anderson has been ruled out of England’s last two Tests against South Africa and faces up to eight weeks on the sidelines with a rib injury during the fifth day victory in Cape Town.

The news is a major setback for the 37-year-old, who was just two games into his comeback following a calf problem sustained on the first morning of last summer’s Ashes.

Anderson spent almost five months working back to full fitness and showed signs of being back to his rhythmical best as he helped the tourists level the series with a 189-run win, taking exemplary match figures of seven for 63.

He was in visible discomfort on the final day, though, clutching his side at times and grimacing through two painful overs after tea.

An MRI scan on Wednesday morning confirmed the bad news.

“James Anderson has been ruled out of the remainder of the Test series against South Africa after sustaining a left rib injury in England’s second Test victory at Newlands,” read a statement from the England and Wales Cricket Board.

“Anderson felt tightness and discomfort at the end of the morning session on day five and was only able to bowl eight overs during the day. He will return to the UK in the next few days.”

Anderson’s tally of 584 Test scalps make him England’s record wicket-taker as well as the most prolific seamer in history, while his appearance in the Boxing Day Test at Centurion saw him become just the ninth man to win 150 Test caps. He used the occasion to suggest he was “not even thinking about retirement”.

That he still has the quality with ball in hand is beyond doubt but withdrawing injured from his last two series places fresh questions over how long he can continue.

England were already giving consideration to sparing Anderson a thankless job on the spin-friendly pitches in Colombo and Galle but the issue will now be taken out of the selectors’ hands, with a bone-related injury likely to require around two months of recovery work.

With that in mind he may now focus on getting ready for the English season, with a view to becoming just the fourth man in history to take 600 Test wickets after Muttiah Muralitharan, Shane Warne and Anil Kumble.

Speaking on Christmas Eve, Anderson revealed his hunger to play international cricket was still as strong as ever but will clearly not relish the work in front of him.

“I think you’ve got to have that fire just to get through rehab because it can be dull as ditchwater, the monotony of it,” he said at the time.

“Without the hunger and desire the play international cricket then you’re not going to get through it.

“I’ve learned I can’t come back from muscle injuries as quickly as I thought I could. As you get older they take longer and I’ve needed a few months to really get back up to speed.”

Somerset seamer Craig Overton will remain with the group having originally arrived as illness cover, but England should also have pace duo Jofra Archer and Mark Wood back in contention for next week’s third Test at Port Elizabeth.