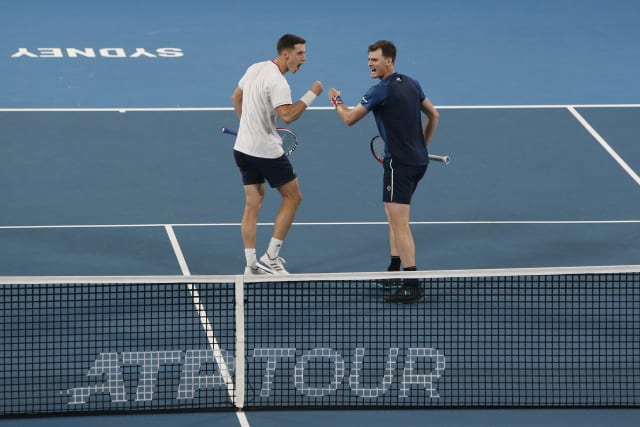 After winning their final Group C game against Moldova 3-0 at the Ken Rosewall Arena in Sydney, Britain needed Belgium to beat Bulgaria to avoid having to rely upon securing one of the two best runners-up spots to make the last eight, and saw them fight back from Steve Darcis’ singles defeat by Dimitar Kuzmanov to win 2-1.

Kuzmanov’s 6-0, 6-3 victory over Darcis was just his second at ATP Tour level, and it looked to have paved the way for success when team-mate Grigor Dimitrov threatened to repeat the feat as he raced into a 3-0 first set lead against David Goffin and eventually prevailed 6-4.

However, Goffin hit back in the second as the Bulgarian faltered, breaking in the first game – which lasted almost 10 minutes – and eventually taking the set 6-2 with an ace before racing through the third to seal a 4-6 6-2 6-2 win, just his second over former world number three Dimitrov in 10 attempts.

There was further drama in the doubles, where Dimitrov and Alexandar Lazarov took the first set but eventually succumbed 3-6 6-4 10-7 after a match tie-breaker.

Earlier, Great Britain’s Daniel Evans had built upon his victory on Sunday against world number 11 Goffin, wrapping up a clean sweep over Moldova with a 6-2 6-2 win over Radu Albot.

The world number 42 saved multiple breaks in the second set to lead 3-1, his passing shots proving too much for the Moldovan.

His win came after Cameron Norrie had beaten Alexander Cozbinov in straight sets 6-2 6-2.

The 24-year-old’s victory came relatively easily, despite Cozbinov fighting back with several good points in the second set.

But the Briton was too strong and after a double fault handed him a timely break at 5-2, he served out comfortably for the match.

The final word went to Jamie Murray and Joe Salisbury, who beat Albot and Cozbinov 6-2 6-3.

The Britons broke their opponents early to take a 4-2 lead before Murray closed out the first set 6-2.

Murray broke again early in the second set, a forehand winner up the line taking Britain to 2-0 to the delight of captain Henman on the court’s edge.

A pair of aces from Salisbury handed the Britons a 5-2 advantage before Murray held his serve to win the match.