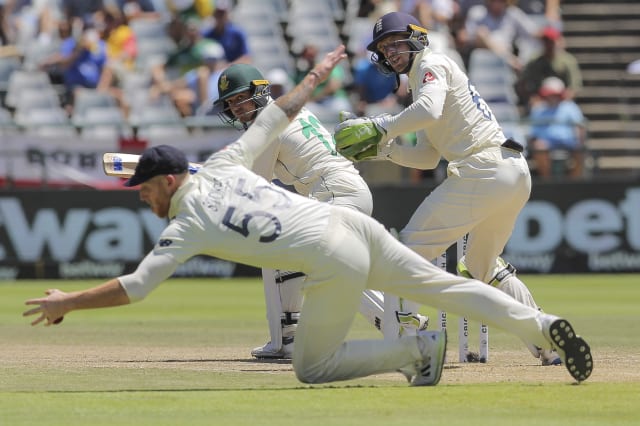 England were left chasing five wickets in the final session to win the second Test against South Africa as the hosts dug deep in defence at Newlands.

Faced with the task of batting out the entire day to save the match, and preserve their 1-0 series lead, the Proteas reached tea in Cape Town at 225 for five having lost three batsmen since the start of play.

James Anderson made short work of nightwatchman Keshav Maharaj, finding his edge in the third over of the day, but that was a false dawn as the Proteas settled in for the long haul.

Faf du Plessis gave the tourists hope when he swept Dom Bess straight to square leg shortly before lunch, a wholly unprovoked lapse in judgement that threatened to push the door ajar, but the baton was picked up by others.

Debutant Pieter Malan chewed up another 95 deliveries after his long vigil on day four, eventually undone by extra lift from Sam Curran for a painstaking 84 that kept him at the crease for more than six hours. And when he was gone, Rassie van der Dussen (17no) and Quinton de Kock (38no) paired up to leave England toiling without further reward through the afternoon session.

Anderson, who would later spend a couple of stints off the field for unexplained reasons, started well by finding Maharaj’s edge but the subsequent partnership between Malan and Du Plessis looked a key one.

For almost 18 overs they successfully killed the momentum, Malan habitually leaving the ball unless it demanded attention and Du Plessis appearing ready for a long rearguard. Then a gift.

After nudging 19 from 56 deliveries, the skipper shed all of his prior inhibitions as he knelt to sweep Dom Bess into the leg-side. With runs essentially a non-factor in the final equation and Bess causing precious few problems on a pitch offering only the most gentle turn, Du Plessis’ shot selection was as baffling as the botched execution.

Rather than tickling it fine or stroking it along the ground, Du Plessis planted it straight to Joe Denly at square leg. England were delighted, surprised and relieved in equal share – not least Denly, taking his first catch since his jaw-dropping spill two Tests ago in Hamilton.

With spirits revived after lunch, Root’s decision to start with Curran paid off as the left-armer slanted one across Malan, finding some extra bounce and clipping the edge. Stokes held on low at second slip, equalling the English out-fielding record for six catches in a Test.

Enthusiasm spiked again but was gradually extinguished as Van der Dussen and De Kock soaked up 169 deliveries as they took the game to its final stanza. With Anderson seemingly off the agenda Root invested heavily in spin, primarily Bess but also Denly’s leg-breaks and his own occasional offerings.

De Kock was more positive than most of his team-mates and created a few more muffled shouts from the bowlers, including an edge that died in front of Root from the final ball of the afternoon. But England needed inspiration or aberration and neither was forthcoming.