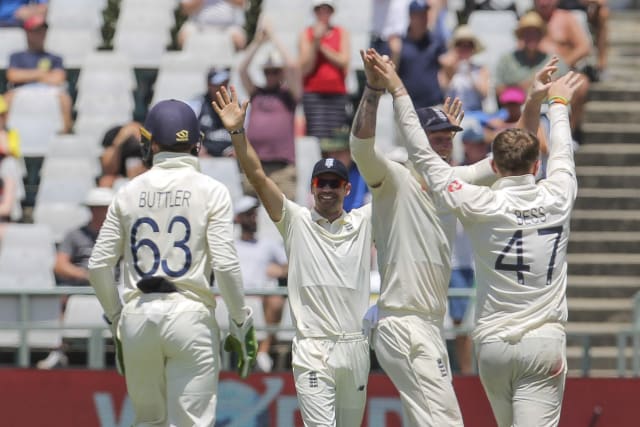 England’s hopes of forcing a fifth day victory in the second Test in Cape Town were boosted by a drastic lapse in judgement from South Africa captain Faf du Plessis.

Needing eight wickets to level the series on a stubborn Newlands pitch, England looked like they would have to settle for James Anderson’s early removal of nightwatchman Keshav Maharaj.

Debutant Pieter Malan, who reached lunch on a rock solid 83 not out, was proving a tough nut to crack and Du Plessis was seemingly relishing his role in the rearguard until conjuring an unforced error that left the Proteas 170 for four.

After nudging his way to 19 from 56 balls the skipper suddenly shed his prior inhibitions as he knelt to sweep Dom Bess into the leg-side. With runs essentially a non-factor in the final equation and Bess causing precious few problems on a pitch offering only the most gentle turn, Du Plessis’ shot selection was as baffling as the botched execution.

Rather than tickling the ball fine or stroking it along the ground, Du Plessis planted it straight to Joe Denly at square leg. England were delighted, surprised and relieved in equal share – not least Denly, taking his first catch since his jaw-dropping spill two Tests ago in Hamilton.

England’s hopes were suitably revived with the second new ball just around the corner but with conditions conspiring against them and just four wickets in the first 83 overs of the innings – one a tail-ender and one Dean Elgar’s disputed edge – there is plenty of hard work ahead.

Things had started well for the tourists, Anderson immediately finding a challenging line around off stump and picking up Maharaj’s edge in the third over of the day. But with Malan leaving expertly and Du Plessis blocking well until his costly error, chances were few and far between.

Ben Stokes looked the most threatening of the bowlers, flogging himself in pursuit of the extra pace England lack in Jofra Archer’s absence but finding only limited success.