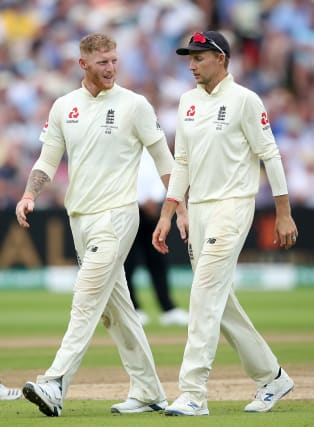 England’s “golden nugget” Ben Stokes and his captain Joe Root both threw their support behind five-day Test cricket after a dramatic late victory over South Africa in Cape Town.

The tourists were forced to toil through 137.4 overs at Newlands, straining every sinew along the way, but finally put the finishing touches on a 189-run when Stokes claimed the last three wickets with 8.2 overs remaining.

The trail had gone gone cold several times over the course of an exhausting concluding act but the rousing manner in which Stokes wrapped the innings up for 248, levelling the series at 1-1, cast a heavy shadow on the current debate around reducing Test cricket to four days.

In the moment, at least, the idea of calling time on such contests in the interests of brevity seemed akin to sporting vandalism.

And in Stokes, the longer format has a powerful – and passionate – ally.

“It was an amazing game to be a part of. The fact it went all the way to the wire proves why Test cricket should be five days and should always stay five days,” he said.

“It must be amazing as a spectator to be living through these emotions but being a player on the field, going through the highs and lows of what Test cricket can do to you on a day-to-day basis is just awesome.

“Test cricket is not made for four days, it’s made for five. It’s called Test cricket for a reason. They should change it to ‘easy cricket’ if they make it four days.”

The England and Wales Cricket Board has offered a “cautious welcome” to the four-day model, which would see each day’s play extended by eight overs in a bid to save on staging costs, a stance which perhaps informed Root’s previous call to be “open-minded” about a change.

In the afterglow of becoming the first England captain to take down the Proteas at Newlands since Peter May in 1957, he sang a slightly different tune.

Away from the troublesome matters of administration, this was another memorable moment for Stokes. Having ended 2019 as the BBC Sports Personality Year, courtesy of heroic performances in the World Cup final and the classic Ashes Test at Headingley, he was at it again in the first match of 2020.

Even before his intervention with the ball he had pouched six catches at second slip, equalled an England record for out-fielders, and smashed 72 second-innings runs in just 47 balls to set up the game.

“I didn’t tell Joe but I said to myself ‘you’re not getting the ball out of my hand here until this day is done’. It was one last push for this Test match,” he said.

“It’s an amazing thing to be a part of, with all the adrenaline, but there’s so much hard work that goes in before those amazing moments in a game. Cricket is a team sport, it’s always a team effort and is never down to one individual.”

Root was happier to shine a light on his star man’s efforts.

“He’s a golden nugget isn’t he? He’s just a fantastic specimen, really. You put him in a lot of different situations and he stands up to it. He’s a born match-winner that will always put the team first and give everything to the group of players he’s playing alongside.

“Not many sides that have a Ben Stokes in them. We’re very lucky to be witnessing what we are at the moment.”