What happened on day four of the second Test between South Africa and England? 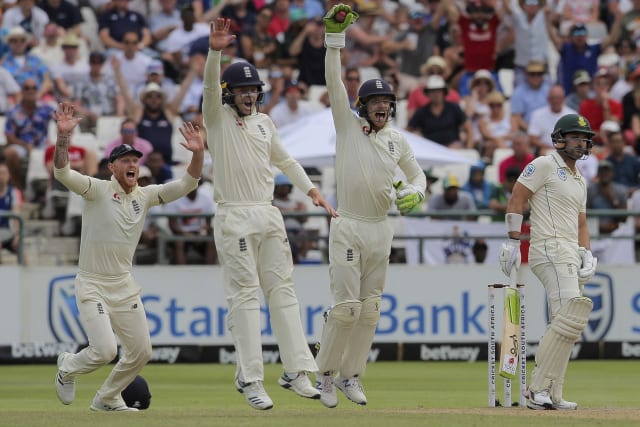 Dom Sibley’s maiden Test century and an injection of adrenaline from Ben Stokes primed England for a fifth day victory push in Cape Town, but South Africa lost just two wickets in 56 overs to leave plenty of hard work ahead.

Sibley converted his overnight score of 85 into 133 not out on the fourth afternoon of the second Test, undefeated after 311 balls over eight-and-a-half hours as the hosts declared with a towering lead of 437.

That was down in large part to an inspired assault from the bat of Ben Stokes, who accelerated the game dramatically in the morning with a knock of 72 in just 47 deliveries.

When Joe Root declared shortly after lunch on 391 for eight England had added 173 runs in just 32 overs, cashing in on Sibley’s groundwork throughout the more gently-paced third day.

South Africa’s response was measured, with an opening stand of 71 only broken when part-time leg-spinner Joe Denly made Dean Elgar his first Test scalp. That was a lone success until the penultimate over of the day, when James Anderson returned to pick up Zubayr Hamza’s outside edge and leave the Proteas 124 for two.

Comedians Romesh Ranganathan and Rob Beckett continued to enjoy themselves at Newlands. A day on from taking in the game from the stands, the duo were offered the chance to try their hands at commentating with TalkSport and even received a catching drill from Nasser Hussain on the pitch at lunch. Given their chosen professions, they may not be disappointed to see their hapless attempts raising a few laughs.

South Africa batsman Dean Elgar was unhappy to be given out after reviewing his caught behind off Joe Denly.

England have had more than their share of fitness setbacks since arriving in South Africa but their latest blow involves a player who has yet to arrive in the country. Seamer Pat Brown had been named in the one-day squad that arrives next month but will now be replaced after suffering a partial stress fracture during his time at Australia’s Big Bash.

A first Test century opened at least one new door for Sibley, with the official Barmy Army travel group unveiling the 24-year-old’s personalised chant – a revision of Tina Turner favourite ‘Simply the Best’.

Day five of five. All three results are theoretically on the table but a home victory, with 312 still needed and an unprecedented chase, is by far the longest shot. England will be hoping for the pitch to belatedly show signs of wear and tear.