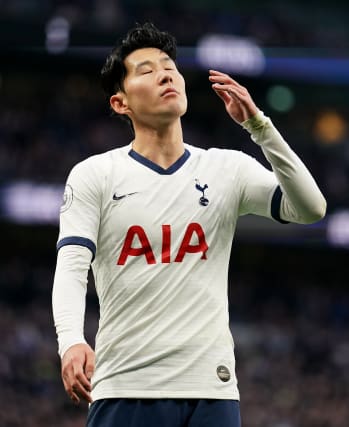 Tottenham forward Son Heung-min insists he has learned his lesson from his latest red card.

The South Korean was back involved for Spurs in the 1-1 FA Cup draw at Middlesbrough after serving a three-match ban for his dismissal against Chelsea before Christmas.

Son kicked out at Antonio Rudiger and received a straight red card for the third time since May.

One of those was rescinded on appeal – the one at Everton where his tackle broke Andre Gomes’ ankle – but all three were the result of petulance, having been fouled.

Spurs missed one of their star assets over the Christmas period and Son is not keen on it happening again.

“It has already passed, I don’t want to speak or think about it,” he said. “I just want to focus on what is coming, that is the most important thing.

“I am trying to learn something about this situation, three red cards is something I don’t want.

“It is not something I expected, but three red cards, it was painful. I will try and learn something from these situations.

“I was frustrated but I came back with happiness – but it was not the result we wanted.

“I am glad to be back, it was very painful to watch the team playing home and away on Boxing Day and New Year’s Day.”

Son suffered more frustration on his return as he struggled in the number nine role, filling in for the absent Harry Kane in the cup draw at Middlesbrough, where Spurs escaped with a replay.

Kane looks set to be out for a couple of months with a hamstring injury and Son has called on his team-mates to help fill the void.

“Harry is one of the most important players in the team and I don’t want to see someone injured, especially your team-mate.

Middlesbrough were good value for their draw, having taken the lead through Ashley Fletcher only to see Lucas Moura equalise for Spurs.

Boro were struggling with a lengthy injury list, but boss Jonathan Woodgate has told fringe players Marcus Browne and Marc Bola they can leave on loan this month.

“I spoke to Browne two days ago and said he’d be able to go out on loan, I think it’s important Marcus gets games so there will be a few teams in for him,” he said.

“Likewise with Marc Bola, he’ll be able to go out on loan and come back in pre-season and fight for his place.

“I think it’s important that with their careers they don’t stagnate and they go out and play games, we’ll be watching them all the way through the season and monitoring their progress.”