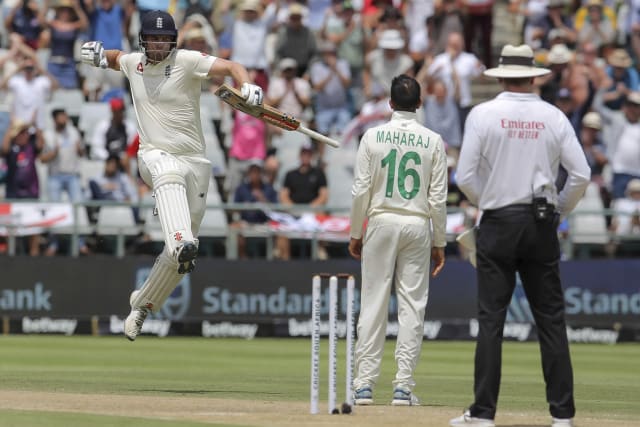 Dom Sibley celebrated his maiden Test hundred on the fourth morning of the second Test against South Africa, with Ben Stokes’ attacking masterclass accelerating the game rapidly in Cape Town.

Sibley converted his overnight 85 into 125 not out as England piled on 157 in 27 overs before lunch at Newlands, taking their lead to a towering 421 with three wickets left.

While Sibley continued playing his anchor role to aplomb, Stokes set the tone for a dominant session as he clubbed his way to 72 in just 47 balls.

With his landmark in sight Sibley was understandably watchful when play resumed, but Stokes was instantly intent on destruction at the scene of his career-best 258. South Africa initially declined to take the second new ball, but if they thought the old one would be harder to hit, they were soon advised otherwise.

A pulled four got Stokes’ blood pumping before a glorious blow for six soared back over Dwaine Pretorius’ head and a reverse pull underlined the message. Keshav Maharaj was next on the receiving end, heaved for six into the stands.

Vernon Philander promptly took the new ball and shipped 12 runs in five balls to Stokes – the same number he had conceded in his first 13 overs. Stokes toe-ended one pull off Rabada on 38 but saw the ball squirm through Quinton De Kock’s gloves as he raced towards short fine-leg.

Sibley’s quiet progress had slipped into the shadows but he reclaimed centre stage as his big moment neared. A thick edge off Rabada took him to 99 but he got over the line in more stylish fashion, stooping to sweep Maharaj for four.

His century had taken 269 deliveries and almost seven hours, the kind of sober knock Test victories are often built on. Stokes was still threatening to catch his partner but his fun stopped when another big blow was held at long-on, halting Maharaj’s suffering.

England’s charge would not be halted, though, with Sibley even entering into the spirit when he crashed the spinner for his first Test six. Ollie Pope and Jos Buttler paid the price for pursuing quick runs, the latter after clearing the ropes a couple of times, but South Africa cut a dejected side as they left the field.