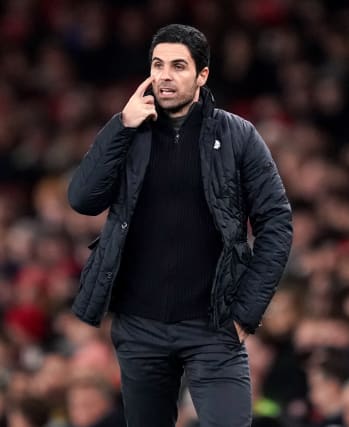 Mikel Arteta was pleased to see his Arsenal side overcome a tough FA Cup test against Leeds but was even happier to read Pierre-Emerick Aubameyang’s programme notes.

The striker was not involved in the Gunners’ 1-0 win over the Championship side, settled by Reiss Nelson’s second-half strike, but contributed to a good evening by committing his future to the club and saying speculation regarding a January exit was brought about by people “making things up”.

He said in his column: “I am the Arsenal captain. I love this club. I am committed to it and desperate to bring it back to the top, where it belongs.”

That was music to Arteta’s ears and the boss is happy the story can finally be put to bed.

“I was thrilled about that and really happy,” he said.

“His commitment since the day I walked through that door has been phenomenal, the work he has been putting in, his attitude around the place with the players.

“He has done it (ended speculation), I do it, I want him here and I am so happy with him, so hopefully that is the end of the story.”

Arteta might have wished he had his star man at his disposal during the first half of a game where they were outplayed by their second-tier visitors.

Leeds had several great first-half chances, none better than the one that saw Patrick Bamford hit the crossbar, but could not make the breakthrough.

The Spanish boss, in only his fourth game as a manager, let his players know what he thought of their performance at the break and saw a reaction as Nelson’s 55th-minute goal capped a much-improved display.

Arteta added: “They battered every team in the Championship every three days, the way they play they make it very difficult, they play man-to-man around the pitch.

“If you are not ready for that game you get exposed and you get done. The second half was a different story.

“When I see what I don’t want to see – and I am not talking about technically or tactically – what I expect from them and the standards we set, I cannot be happy and I have to let them know.

“We had to react and we changed some things, but the biggest change was how we approached the second half, the mentality, how aggressive we were, how we played in their half, won every duel, making runs forward, it was different.”

For 45 minutes the Gunners were given the run around against a Leeds side who have been performing excellently under Marcelo Bielsa for the last 18 months.

This first-half display was nothing new to anyone who has seen the Yorkshire side in recent times, but Arsenal were caught cold.

Leeds had 15 shots in the opening 45 minutes, but could not make the breakthrough and then suffered to recreate their dominance in the second half.

On this evidence, they would be a worthy addition to the Premier League next season as they are comfortably in the automatic promotion places in the Championship.

Bielsa did not want to look that far ahead and instead looked for reasons why his side could not reproduce their first-half display.

“We wanted to beat them and tried to win the match,” he said. “The first half was what we wish and in the second half we understand that is difficult to keep control of the match as in the first half.

“We should have achieved to try and play a match with much more balance.”

On whether his side are ready for the Premier League, he added: “It is not a question I cannot respond to.

“It is something we don’t know if it is going to happen. We lost 4-0 against Manchester United. I don’t think we can take conclusions from this match whether we are ready for the Premier League or not.”