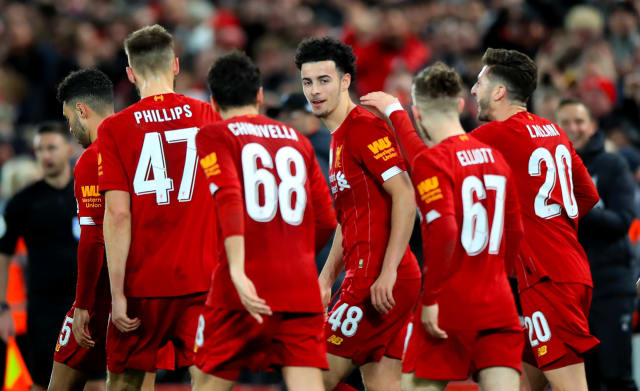 Jones, at 18 years and 340 days, became the youngest goalscorer in the derby since fellow Toxteth-born forward Robbie Fowler in 1994 and his superb curling effort off the underside of the crossbar was a goal of which the man known in these parts as ‘God’ would have been proud.

The 1-0 defeat heaped more embarrassment on a virtually full-strength Everton, who have not won on this ground since 1999, as they failed to beat a side registering nine changes which included two debutants and a third who played 81 minutes after injury to James Milner.

They may have a new manager in Carlo Ancelotti, whose personal record against Liverpool is far superior to Everton’s, but the end result for the Toffees was still the same.

Liverpool were playing in a fifth different competition in just 27 days and with their inexperienced side weakened further by the early loss of Milner, this represented Everton’s best chance of ending their Anfield drought.

But they wasted that, particularly in the first half with four big chances going begging. Visiting teams rarely get so many opportunities over 90 minutes so Dominic Calvert-Lewin, Richarlison and Mason Holgate will have headed down the tunnel kicking themselves.

The former had the first and last chances of the half, a shot saved by the legs of Adrian and a diving header which he failed to properly connect with.

In between Holgate headed straight at Adrian with all the goal to aim at from Gylfi Sigurdsson’s free-kick, while Richarlison hit Theo Walcott’s poor cut-back at the goalkeeper’s legs.

After a chaotic first 20 minutes Liverpool gained better control of the ball as Everton’s pedestrian midfield of Gylfi Sigurdsson and Morgan Schneiderlin were easily bypassed.

However, they still could not create the chances their opponents did until new signing Takumi Minamino, making his debut, missed a header from eight yards from Divock Origi’s cross.

Origi’s deflected low shot was tipped around the post by Jordan Pickford but Everton will have ended the half more disappointed.

After the break Origi, scorer of five in six derby appearances, tried his luck from 40 yards and Pickford dived low to turn it behind.

If that surprised the Everton goalkeeper he was stunned – as was the rest of Anfield – by Jones’ goal.

Klopp sent on a fit-again Alex Oxlade-Chamberlain and the knock-on effect was to push the youngster further forward – with devastating effect as it turned out.

The 18-year-old casually flicked a pass to Origi and when the ball was returned he curled a superb shot into the top corner off the underside of the crossbar.

At the final whistle Everton’s Djibril Sidibe collapsed to the floor with his shirt pulled over his face and several of his team-mates bent double with their hands on their knees, as much in embarrassment as exhaustion, and the haste with which they headed down the tunnel told its own story.