Sheffield United hold on to deny non-league Fylde a replay 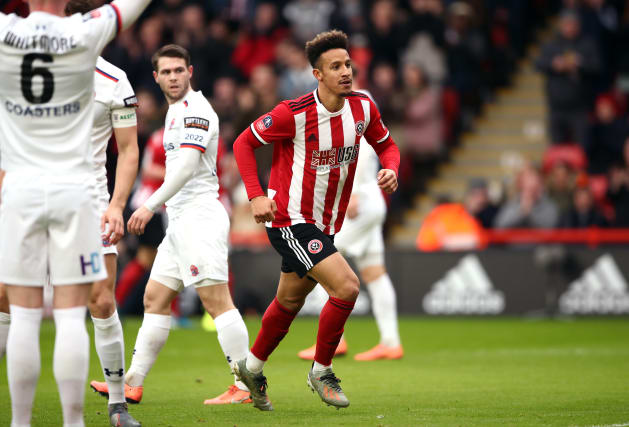 A much-changed Sheffield United side did not repeat the mistakes of last year as they overcame AFC Fylde 2-1 in the FA Cup third round.

Chris Wilder, who made 11 changes, saw his team go out of the competition at this stage last season as National League Barnet caused an upset at Bramall Lane.

The Blades hosted opposition from the same division again on Sunday but this time avoided a giant-killing thanks to Callum Robinson’s early goal and a Leon Clarke strike on the hour.

However, the lowest-ranked team remaining in the competition made the Premier League club sweat by setting up a tense finale when Jordan Williams pulled a goal back with 12 minutes left.

Kean Bryan dragged a shot wide before Robinson opened the scoring after eight minutes. The Republic of Ireland international controlled Luke Freeman’s cross and fired the ball home on the turn from six yards out.

Freeman almost fluked a second goal shortly afterwards when his mishit cross had Fylde goalkeeper Sam Hornby scrambling backwards before he helped the ball over the crossbar.

The non-league side threatened when Nick Haughton latched on to a Dan Bradley pass to go through on goal, but Mo Besic produced a last-ditch challenge to avert the danger.

Clarke had a couple of chances to extend the lead but his header was off target on each occasion.

There was a break in play just before half-time for what looked like a potentially serious injury to Blades goalkeeper Michael Verrips, who was making his first senior appearance for the club.

A collision with team-mate Kean left the young Dutchman laid out on the ground before having to be replaced by number one Dean Henderson. Verrips managed to walk off the field, which was a good sign.

Hornby kept Fylde in the tie with fine save to deny Robinson at the start of the second half before at the other end Alex Whitmore squandered a glorious chance to equalise. The defender had a free header but planted his effort agonisingly wide of the post.

Clarke, skipper for the day, gave Wilder’s team some breathing space when he was on hand to tap in the rebound from close range after Freeman’s shot had struck a post.

However, the visitors were given a lifeline when Williams raced on to a ball over the top and lobbed Henderson in the 78th minute.

Williams then put an effort into the side-netting as Fylde chased an unlikely equaliser and the team eighth in the Premier League finished the match hanging on.