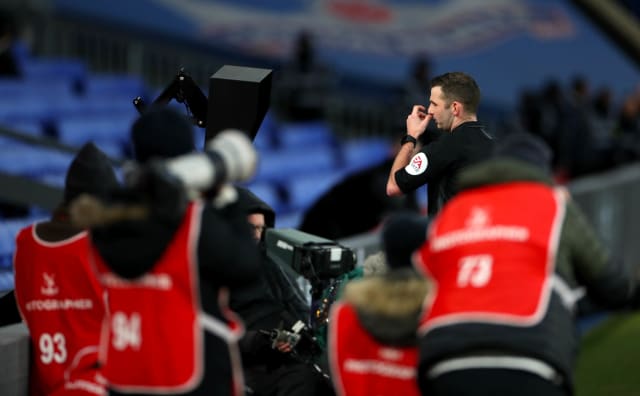 Crystal Palace manager Roy Hodgson was not surprised to see the pitchside monitor used during their 1-0 defeat to Derby in the FA Cup but is unsure if he wants it to become a regular occurrence in the Premier League.

Ex-loanee Chris Martin scored the only goal of the third-round tie against his old club at Selhurst Park.

But the big talking point occurred in the second half when Palace captain Luka Milivojevic was sent off for an incident with Derby’s Tom Huddlestone.

Milivojevic kicked out and then moved his head towards the midfielder, but the pair were both shown yellow cards before VAR reviewed the incident and Michael Oliver took it upon himself to look at the pitchside monitor before changing his decision to a red card.

“I’m not surprised the VAR monitor has been used because that’s what people have been talking about,” Hodgson said.

“I mean the radio, the TV and the written press have been talking about ‘why don’t the referees use the monitor more?’ so I wasn’t at all surprised to see him use it.

“As far as the incident is concerned, I’ve seen it over myself, I think it’s a harsh decision. It’s one by the letter of the law. It’s one Tom, to his credit, didn’t make a meal of it. It was just a movement of the head in his direction.”

Ashed whether he would like to see more referees use the pitchside monitors after Oliver become the first this season, Hodgson added: “No, not particularly.

“If it is going to be the referees decision on that field that counts why do you bother with the VAR people sitting there in Stockley Park?

But Derby settled, with Wayne Rooney pulling the strings in midfield, and went ahead when Jayden Bogle crossed in for Martin to score and it was enough to send them through.

Manager Phillip Cocu said: “I am delighted and pleased, especially with the way we played the game.

“Of course we came here to try and get a result, but more important was that we came here and played a game of football with bravery and courage to play from the back. We did a great job.”

Cocu is all for referees using the pitchside monitor more after Oliver used it to send off Milivojevic in the 67th minute.

“I didn’t see what happened, I only saw a reaction of Tom Huddlestone, which indicated something happened because normally he is a very calm person, but I couldn’t judge if it was a red or not,” he added.

“That is where the VAR came in and if the referee is going to use the screen alongside the pitch and after he gives a red card, I think it is a red card.”