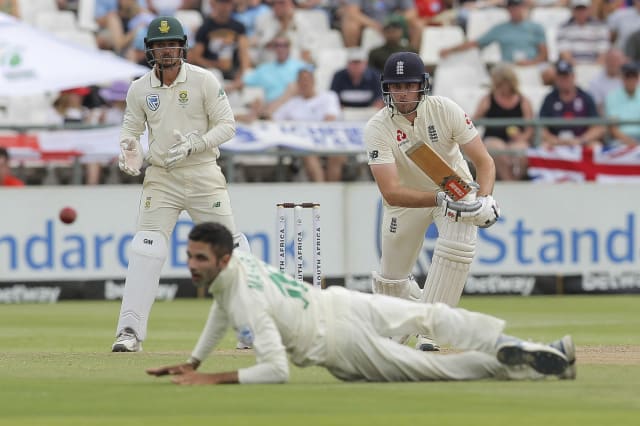 Dom Sibley patiently guided England to a commanding lead of 155 on day three of the second Test against South Africa, after James Anderson laid claim to another bowling record in Cape Town.

England took tea at 109 for two in their second innings, with Sibley’s unbeaten 44 grinding out a methodical stand of 73 alongside Joe Denly as the tourists slow, but decidedly, advanced their push for a series-levelling victory.

The 37-year-old was quick to wrap up the Proteas innings for 223, taking the last two wickets with minimal fuss to claim figures of five for 40 and deliver a handy 46-run lead.

Anderson was not the only Englishman celebrating a landmark achievement, with Ben Stokes becoming the country’s first non-wicketkeeper to take five catches in an innings when he held Anrich Nortje at second slip.

Zak Crawley gave England a brisk start, ignoring a couple of nasty blows from Kagiso Rabada to pick up a slightly frantic 25.

He played one shot too many in the 11th over, aiming through extra-cover but edging Rabada behind, before Sibley and Denly dropped anchor.

At lunch they had nudged the lead to 98 but South Africa pumped the brakes in the afternoon session, conceding just 29 runs in the first hour.

Keshav Maharaj held down one end tidily, riding an early attempt by Denly to disrupt his rhythm.

Denly lifted him down the ground for four and went hard again with a carve over cover. The second shot lacked control, and might have easily gone to hand, but the Kent batsman took the warning and returned to a more patient brief.

Sibley needed no such encouragement to do so, studiously waiting until the bowlers drifted on to his pads to move his score along to his Test best.

Hopes of a wicketless session expired when Denly (31) swivelled into a short ball from Nortje and directed his pull into the hands of Dwaine Pretorius at fine-leg.