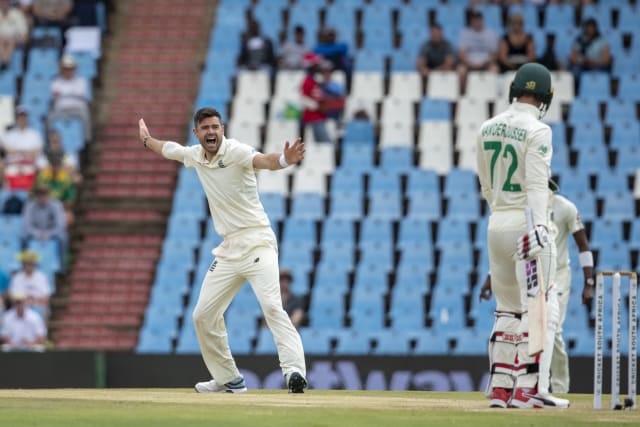 England established a commanding lead of 98 on day three of the second Test against South Africa, as James Anderson helped himself to another national record in Cape Town.

Anderson removed Kagiso Rabada with the first ball of the morning and then dismissed last man Anrich Nortje as the Proteas subsided for 223. In response England steered a path to 52 for one at Newlands.

That completed exemplary figures of five for 40 for the 37-year-old seamer, who overtook Sir Ian Botham with his 28th Test five-for. Among fast bowlers only Australia’s Glenn McGrath and New Zealand’s Richard Hadlee have taken more.

He was not the only Englishman celebrating a landmark achievement, with Ben Stokes becoming the country’s first non-wicketkeeper to take five catches in an innings when he held on to Nortje at second slip.

Anderson’s clinical work delivered a first-innings lead of 46, a position England would barely have imagined when they were rounded up for 269 on the second morning.

Zak Crawley and Dom Sibley extended their advantage by 28 runs before Crawley fell in the 11th over.

Crawley had done almost all of the scoring, with a handful of pleasing strokes in his 25, but also wore blows to the grille and shoulder as Rabada attacked with the new ball.

Crawley was looking to plant the bowler through extra cover when an outside edge whistled to Quinton de Kock.

Sibley was more sedate, scoring four from his first 33 balls, but picked up three boundaries before lunch as he and Joe Denly kept South Africa waiting.