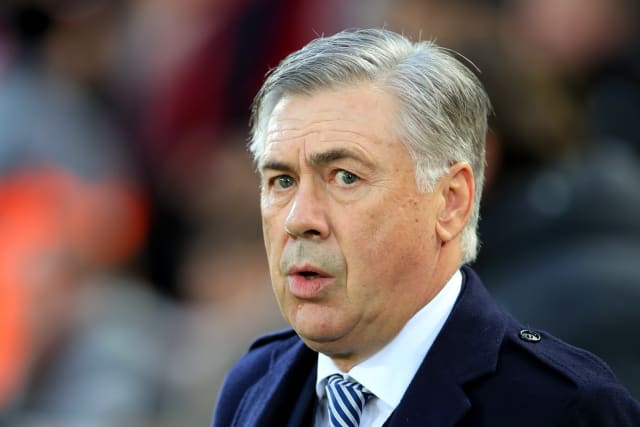 Everton manager Carlo Ancelotti broke his usual habit by speaking to the players immediately after the game about a performance which was “not good enough”.

The Toffees winless run at Anfield extending back to 1999 was extended after Liverpool 18-year-old Curtis Jones scored a brilliant winner in the 1-0 FA Cup third round victory.

If Everton were ever going to end their drought this was a game for them to do it as Jurgen Klopp made nine changes, fielding a starting line-up which cost £43.9million – equivalent to their opponents’ record signing Gylfi Sigurdsson – and included two debutants with a third playing 81 minutes after injury to James Milner.

However, the visitors, whose own virtually full-strength starting XI cost in the region of £222m, squandered four good opportunities in the first half and never recovered from not taking any of them.

“I am not used to speaking to the players after the game but I am going to speak to them about this,” said the Italian, who has now suffered back-to-back defeats after winning his first two matches in charge having taken over from caretaker boss Duncan Ferguson on Boxing Day.

“I think in the second half we were not able to keep the right ideas on the pitch as we did in the first half, when we had (the) opportunity to score.

“The fact we didn’t score in the first half affected the performance in the second half, which was not good enough.”

It was suggested to Ancelotti that the players had a mental block when it came to games at Anfield, such is their record at the ground, and that they had missed their best chance to win there with Liverpool fielding an under-strength team.

“The line-up of Liverpool didn’t affect our idea. It was to play a good game. We knew Liverpool would put fresh players in and the intensity could be high.

“The defeat arrived because we were not able to keep a high intensity in the second (half). We lost energy and confidence.”

After a performance which former Liverpool defender Jamie Carragher described as the worst derby display at Anfield in 35 years the situation Ancelotti has inherited was laid bare to him and it is something he hopes to address in the transfer window.

“We are going to speak all together and find a solution to try to improve the team,” he said.

Liverpool manager Jurgen Klopp was understandably delighted after his calculated gamble of giving the majority of his first-team stars the day off paid dividends.

“I saw a sensationally good performance from a not-very-experienced team, with a lot players for the first time playing on this stage in front of this crowd and this type of opponent,” he said.

“It was outstanding. I loved each second of the game.

“We never take it (the cup) for granted. I would love to see a few people and ask them what they thought about the line-up, and all these bad things about me and the FA Cup and no respect.”

Of Jones’ goal he said: “It was an absolutely sensational goal, I love it.

“Unbelievable player, Scouser, very confident, can’t wait to play in the first team. Rightly so. He is in a very good way.

“He has made big steps, he will be a Liverpool player if nothing strange happens – 100 per cent.

“I’m not surprised he scored that kind of goal. He has still things to learn and improve, but you sometimes forget, and we forget it in training, that he is only 18. Unbelievable.”

The only downside was the injury to Milner, with Klopp adding: “Milner has pain and that is serious. It’s a muscle.”