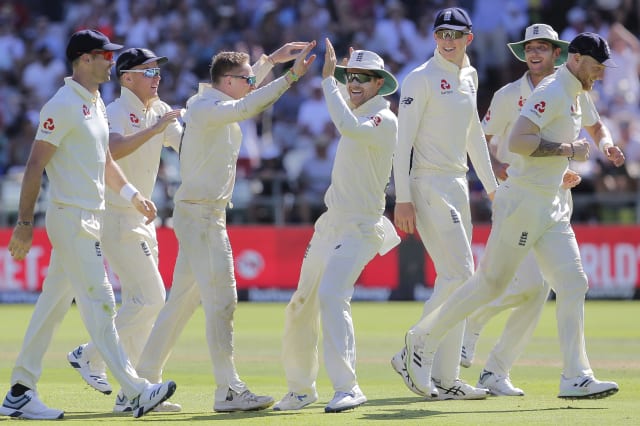 England bowled with skill and heart to drag themselves back into contention in the second Test against South Africa, but Stuart Broad paid the price for over-stepping on a hard-fought day in Cape Town.

Having been dismissed for an under-powered 269 the tourists kept the home side’s scoring on a leash and built pressure at either end of day two, with the Proteas reaching stumps 54 behind on 215 for eight.

James Anderson finished with three for 34, Broad struck twice in a tone-setting early blast, while Sam Curran and Dom Bess played sound supporting roles, but England might have been even better set.

Dean Elgar (88) and Rassie Van Der Dussen (68) put on 117 runs during a long barren stretch through the middle of the day but Van der Dussen was fortunate. He was fully justified in over-turning an lbw verdict with just six to his name, a big inside edge having been missed in real time, but lucky on 43 to see the ball squirm free as Ben Stokes dived to complete a one-handed catch.

But his real reprieve came when he had only 16 and a brilliantly directed Broad delivery, spitting and rearing in from back-of-a-length, brushed his glove on its way through. He began to walk for the pavilion but turned on his heels once replays showed that Broad had no-balled.

England have had seemingly endless bad news on the fitness front since landing in South Africa but Saturday brought a rare positive update. Scan results on Jofra Archer’s injured right elbow showed no serious damage beyond the pain he has been experiencing and Mark Wood’s rehabilitation from a side injury has gone up a step. Both players, by far England’s quickest bowlers, are likely to be in contention for the third Test.

Newlands is renowned as one of the most beautiful grounds in the world, so it was a dreadful sight to see the venue’s grass banks drowning in discarded single-use plastic cups at the end of day one. After the problem came to light on social media the official Barmy Army travel group leant their voice to the cause, requesting fans to be responsible with their waste.

South Africa’s World Cup-winning rugby union captain Siya Kolisi appeared on the outfield during the tea interval, inspiring a chant of “Swing Low, Sweet Chariot” from the travelling fans. The singing subsided swiftly enough for the crowd to take in his interview, earning the ovation his achievements deserve.

Day three of five. England have given themselves a big chance to take a workable first-innings lead but will be wary of past struggles to mop up the tail. South Africa know they will soon be bowling again and will want to expose an inexperienced top order once more.