Jay Rodriguez at the double as Burnley ease past Peterborough 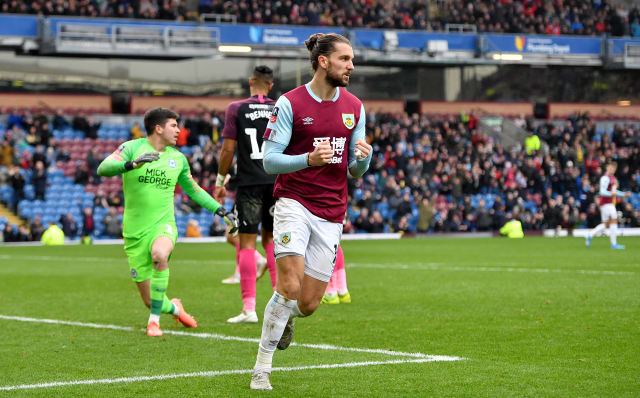 Jay Rodriguez scored twice as Burnley responded to a poor run in the Premier League with a 4-2 victory over Peterborough in the third round of the FA Cup at a sparsely-attended Turf Moor.

The Clarets have lost their last three matches and League One promotion-chasers Peterborough would have fancied their chances against a team showing eight changes.

But Posh, who have not beaten a top-flight side in the FA Cup since 1965, have also had a poor festive period and they were three down inside 25 minutes through goals from Rodriguez, Erik Pieters and Jeff Hendrick.

Ivan Toney and Mo Eisa have scored 28 league goals between them this season and Toney seized on a defensive mistake to pull one back before half-time with his 17th of the campaign.

But Rodriguez’s second all but clinched the tie for Burnley even though teenage substitute Ricky Jade-Jones pulled one back for Posh late on.

Burnley had managed just three shots on target in their last four matches combined but were clinical in converting three early chances.

The opener came in the eighth minute when Chris Wood found space and headed towards the bottom corner. Christy Pym got a hand to the ball but could only push it out to Rodriguez, whose tap-in was allowed to stand after a quick VAR check for offside.

Pym denied Gudmundsson, making a welcome first start since suffering a hamstring injury in October, but Pieters doubled the lead in the 15th minute with his first Burnley goal, swinging the outside of his left boot at the ball 25 yards out and seeing it nestle in the bottom corner.

Brown came close to pulling one back with a shot just wide of Hart’s far post but it was all too easy for Burnley at the other end and a nice move ended with Lowton teeing up Hendrick.

Mark Beevers attempted to block the Irishman’s well-struck shot but only succeeded in deflecting it over Pym.

Posh responded well and pulled one back six minutes before the break when Toney seized on a poor back header from Lowton and rounded Hart before slotting in.

The visitors finished the half by exerting some sustained pressure on the Burnley defence and it was a similar story after the restart.

But a poor touch from Toney when he was clean through allowed Hart to gather and Burnley grabbed their fourth in the 52nd minute.

Lennon, who was seizing his chance to impress, combined with Hendrick and then played in Rodriguez, who beat the offside trap and steered his shot in off the far post.

Brown would have been holding his breath when a high challenge on Long prompted a VAR check for a possible red card but referee Robert Jones’ original decision of a yellow was allowed to stand.

The game seemed to be meandering towards a conclusion but Peterborough managed to score a second in the 76th minute.

Burnley thought Beevers had pushed James Tarkowski as a corner came in but no foul was given and Jade-Jones stabbed in after Pieters had cleared off the line from Toney.

Hendrick nearly made it five in injury time but his free-kick hit the bar.